I love a good and funny celebrity story, and this one's no exception.

A long-time friend randomly checked out Crobar Saturday night without knowing that it was also a party for bombshell former "Baywatch" star Pamela Anderson.

They made their way to the VIP section, and he says that he saw "a really hot blonde, I mean really hot," and then he looked again and realized who it was.

He says Anderson was tiny in person and had a very large entourage. Even though the club was packed, he adds, no one was bothering her or even gawking in her direction. So, around 3am her party left, making way for my boy to move in on her table.

"We had to do a double take because she had left a full bottle of Cîroc Ultra Premium Grape Vodka," he says gleefully. "We polished that right off and then got up outta there!"
Served deliciously by 312 Dining Diva at 4:05 PM 1 comment: Links to this post


312DD finally got to actually taste the burger we've been braying about since we were the first to deliver you the scoop back in the fall.

That'll be M Burger, the casual sandwich shop adjacent to its four-star sister TRU, which opens to the public Thursday. It's owned by Lettuce Entertain You Enterprises, and partner Scott Barton told us that the "M" pays homage to the Mag Mile.

They were open Monday for a select few during lunch rush, offering folks who work in the area first shot for the test drive. The full menu was available, but I was highly encouraged to order a few items that will only be on a "secret menu." You'll need to put on your list to remember the Hurt Burger (a spicy sandwich with BBQ sauce, Pepper Jack cheese and jalapeños) and the ultra-creamy Caramel Shake.

The rest of the menu is pretty standard fare, most notably the signature M Burger (drizzled with a tangy secret sauce and bits of bacon), Nurse Betty (veggie sandwich named after a popular Northwestern Memorial Hospital nurse) and fried chicken sandwich. The most expensive burgers on the menu were the Hurt and M—when you ordered it double stacked at $4.79.

M Burger's tiny, with only a few counter seats on the wall and a few more with a good view of the famous TRU kitchen. That's why it'll be a big relief when it gets warmer, as they'll have 40 sidewalk seats.

Two big events are coming up that should excite folks: When the iPad launches at the Michigan Avenue Apple Store at 11am April 3, look for M Burger to extend its hours to midnight the previous night to take advantage of the expected crowds (regular hours will be 11am-7pm).

And look for them to also offer a special minty chocolate Leprechaun Shake on St. Patrick's Day only. Hopefully it'll taste a helluva lot better than that whipped cream Shamrock Shake nonsense McDonald's is trying to pass off to us this year!
Served deliciously by 312 Dining Diva at 1:16 PM No comments: Links to this post 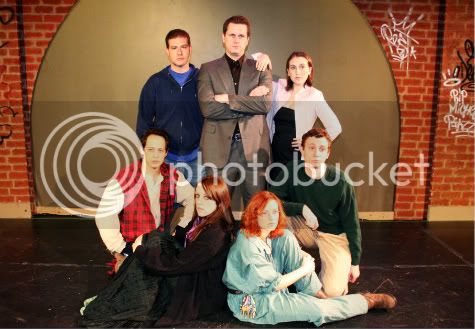 The cast of "The Breakfast Club Musical." (Photo: Nancy Fast)

The Breakfast Club Musical at Studio Be Theatre. The touching Oscars tribute to iconic teen angst filmmaker/director John Hughes demonstrates just how important his movies were. That's why we're especially excited about this production of one of his best works about an unfortunate group of teenage misfits forced to spend one fateful Saturday together. 8pm Thursdays (through April 29). Get tickets here.

DMK Burger Bar: Two grass-fed patties, special sauce, lettuce, cheese, pickles, onions on a flour top bun is The DMK, which was just launched at the Lakeview hot spot. Or, you can go for The #4, its popular burger with roasted hatch green chile, fried farm egg, Sonoma jack cheese and smoked bacon.

HUB 51: They've added yummy new items to the menu at everyone's favorite yuppie watering hole, including the $28 lobster tacos filled with 8 oz. lobster tail and Mexican beans. And if you're in need of cocktails after the show, you'll only need one of these. The HUB Punch Part Trois is quite a potent concoction of Grey Goose La Poire, Chambord and cranberry juice.

Mercadito/Double A: Speaking of tacos, this jumpin', upscale Mexican spot has become the place to be on Hump Day—even though you won't find any deals on the menu. Plus, lower-level sensation Double A recently expanded its hours, so you can head down for drinks earlier at 6pm. Recommendations include Shuga Daddy (rum, Champagne, orange bitters, rosemary, kumquat) and Caipisutra (leblon cachaca, pineapple, grapefruit, garam masala). Deejay spins after 9pm.

The interior of lower-level lounge Double A. (Photo: Double A)

Bar Novo: There's so much good stuff on the menu at this colorful after-work hotel bar that it's really hard to choose! Since everything's pretty light, you can order a few items, so go for the smoked prime rib nachos, mini Cuban sandwiches and crispy calamari.

State and Lake: Braised shortrib is on the menu, and you can get it in two forms: as an entree accompanied by mac 'n' cheese or as an appetizer in the Deviled eggs. Also, the hearty burger, topped with Havarti cheese, is not to be missed. It's so big you can share, plus it comes with a plateful of crispy hand-cut fries.
Served deliciously by 312 Dining Diva at 12:00 PM No comments: Links to this post

The Chicago Oscar Parties You Missed!


Some of Chicago's most stylish set were on the scene for Oscar fun Sunday night.

It was more kitschy than couture at Kit Kat Lounge & Supper Club, where the venue was decked out in "Avatar" splendor.

Too bad the film didn't win the biggest awards of the night for Best Director and Best Film. Oops.


Over at The Drake, a cheap, yet chic affair was in progress, benefiting Project Save The World.

Guests were greeted with a glass of complimentary champagne at the door, and hopefully they arrived early for a space because this thing sold out.


And Chicago's most prominent benefit was held at the Gene Siskel Film Center in the Loop. Sponsored by Moët & Chandon and hosted by glamorous girl-about-town Amanda Puck (in Sofia Vintage!), this was definitely the hottest ticket Sunday night.

The event was the city's official Oscar party and raised money for the Gene Siskel Film Center.

Our friends at NBCChicago.com showcase even more folks out on the town here.
Served deliciously by 312 Dining Diva at 8:15 AM 1 comment: Links to this post

These Meatballs Are Insanity!


I almost never turn down an invitation for dinner at Osteria Via Stato because that means yet another chance to chow down on their amazing Mini Veal Meatballs.

Simply dressed in a spicy tomato sauce, they're a signature staple on the appetizer menu, so yes, you're expected to share! $6.95.

Yet another reason why we need The Meatball Shop in Chicago!
Served deliciously by 312 Dining Diva at 7:00 AM No comments: Links to this post