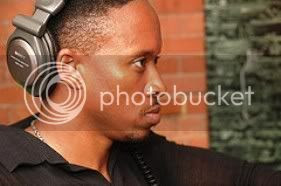 You'll want to do some serious chilling out as he spins his special blend of deep house, funk and eclectic beats. Resident deejays Sean Alverez and Christian Armand also spin. Doors open at 8pm; $5.
Served deliciously by 312 Dining Diva at 9:54 AM No comments:

Who wants to watch a show this good alone?

They're debuting the "Design Your Own Martini" contest tonight in which guests are invited to enter their best martini "design" each Wednesday. The favorite martini will be chosen at the season finale viewing party and the "designer" will be awarded a $250 Absolut vodka gift basket.

Doors open at 5:30pm, and "Project Runway" airs at 9, so get there early to grab a seat and take advantage of the half-price cocktails and martini specials.

Also, they've added some entrees paying homage to the show, including:

It'll be your chance to shout in unison: "You in, oh you out."
Served deliciously by 312 Dining Diva at 9:15 AM No comments:

Reality stars on a roll 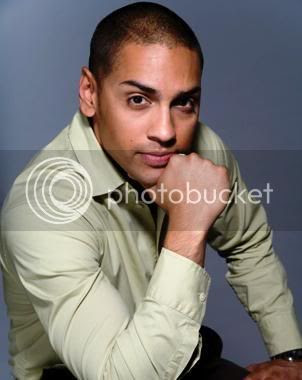 Michael Laungani from "The Apprentice: Season 5"


They've already showcased their skills of brain and brawn on such high-rated shows as "The Apprentice," "Big Brother" and "Survivor." Now, they're testing just how creative they can be in the kitchen as they design new sushi rolls in order to raise money for a good cause.

Tonight, the Glenview RA Sushi hosts "RA Reality," and four reality television stars have transformed into top sushi chefs. The winning roll will then be available in December at all three Chicagoland RA Sushi locations (Chicago, Glenview and Lombard) with a to-be-determined percentage of the proceeds donated to the winning reality star's charity of choice.

James Rhine of season 6 of "Big Brother" aligned himself with Immerman Angels to create a roll called Big Angel; "Survivor Fiji's" Mookie Lee is benefiting his own charity Active Chicago with the Ravu Roll; while Season 5 "Apprentice" alum Michael Laungani has cooked up The Orchid on behalf of the Make-a-Wish Foundation of Illinois; and Jamie Murray of "The Real World New Orleans" developed the Uber Uber Roll for La Rabida Children's Hospital.

The reality stars' rolls will be judged by a panel of media insiders and guests in attendance on the most innovative name, ingredients, presentation, and most importantly the taste. The winning roll will then be featured on its own special menu with a photograph of the reality star who created it.

A freebie for my friends 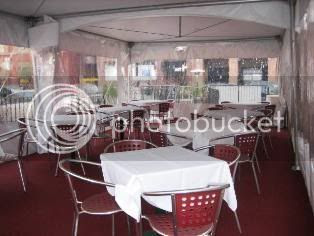 You can enjoy Citizen's heated tent lounge even as the temperature drops.


If you're missing those lazy summer afternoons spent on Citizen's (364 W. Erie St., 312-640-1156) spacious outdoor patio, have no fear. They're back. But this time, the patio's tented over for an all-weather outdoor dining experience so that you don't freeze your ass off as the temperatures drop.

Tonight, they're launching the new tent offering with a grand opening party starting at 7pm. Enjoy complimentary wine, beer and passed appetizers until 8. Then you can enjoy their new fall menu by candlelight.

Chaise Lounge: The rooftop bar is as swanky as the indoors downstairs lounge, complete with a deejay, full-service bar and cabana seating. 1840 W. North Ave., 773-342-1840.

Northside Bar & Grill: Ideal for brunching or hanging out right before you head out, this venerable outdoor patio is one of the best in town for lazy days or nights. 1635 N. Damen Ave., 773-384-3555. 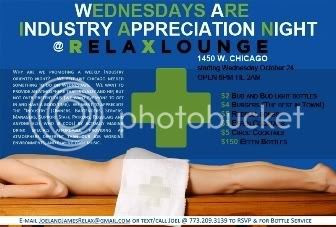 What would we do without all the countless servers, bartenders, hostesses and other service-industry folks making our dining and nightlife experiences enjoyable?

The staff over at Relax Lounge (1450 W. Chicago Ave., 312-666-6006) hosts a Wednesday night industry appreciation party where you can personally thank them as they chill out in this upscale loungey setting in Ukrainian Village.

Doors open at 6pm, but folks start trickling in around 9. No cover, so be there, and buy a service-industry friend a drink.
Served deliciously by 312 Dining Diva at 6:47 AM No comments: