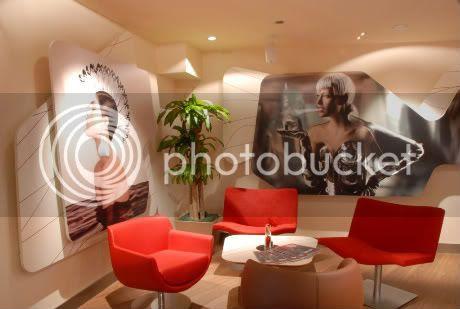 Espression by Lavazza opens this week in The Drake. (Photo: Cindy Kurman/Kurman Communications)


Seems like every week something new’s springing up. This time, it’s Espression by Lavazza, a slick Italian café concept just opened in The Drake. They’re serving up special blends of coffee, gelatos and pastries, but right about now I’m going to need that brie, prosciutto and fig panini or Bikini Pizza Panino (grilled panini “pizza style” with sun dried tomatoes, mozzarella, mushrooms) placed in front of me.

Also look for high-stylin' "dive" Bar DeVille, which actually opens Monday, Nov. 17, but you never know. Neighborhood bars tend to creep open a few days early, so I’d peep my head around the corner at Huron and Damen to see if co-owner Matt Eisler (Angels & Kings, Empire Liquors) does a weekend preview.

Carol Wallack's charming neighborhood gem, Sola, is now doing its take on the burger that's paired with a special bacon appetizer. Also, get a featured beer. That's every Thursday.

Highsight hosts a number of pre-parties for the yearend Eve of the Eve event, happening the night before New Year's Eve. Tonight's party occurs at Rock Bottom Brewery, and includes cocktails and appetizers. Guests will also be able to buy tickets to the December event at Union Station. Proceeds fund scholarships for students to attend private high schools in the city. 6-9pm. $40.

Single women wondering where all the eligible, single guys are should make their way to Publican, in the Warehouse District. It actually shouldn't come as no surprise that this extreme beer-focused venue attracts a higher ratio of men, right?! Arrive right after work and position yourself at one of the centrally placed high tables, and let the games begin.

Windy City Social throws a bash at The Joynt for the Special Olympics Chicago programs. Mingle with other professionals and indulge in Sugar Bliss cupcakes and passed apps, plus cocktails and wine. 6-8:30pm. $35 in advance; $45 at door.

Pinot Days 2008 Grand Festival returns to Navy Pier with 50 producers of pinot noir--the largest single gathering of pinot producers outside of Cali. Consumers will be able to sample up to 100 pinots from every important region in California, Oregon, New Zealand and Burgundy. Also, learn how to pair them with artisan cheese and specialty foods. 1-5pm. $50. Call 415-246-2267 for more information.

If bubbly's your poison, head instead to Pops for Champagne for a Laurent-Perrier Tasting. You'll get three examples paired with apps for $15. 3-5pm.

Wouldn't you rather be in a warmer climate right now?! C-House teases us with its new Bossa Nova Brunch. You'll find Latin-infused dishes, including breakfast tacos with chorizo and corn salad, custom eggs Benedict with spicy pulled pork, or the traditional Brazilian rice and beans dish Feijoa. Also, chill out with a number of signature sippers: pineapple-orange Mimosa, red snapper Bloody Mary, and of course a classic Caipirinha. Too bad they didn't spring for a Brazilian band, but piped-in Bossa Nova should do the trick, for now. 10:30am-3pm. All dishes are a la carte.
Served deliciously by 312 Dining Diva at 6:40 AM 1 comment: