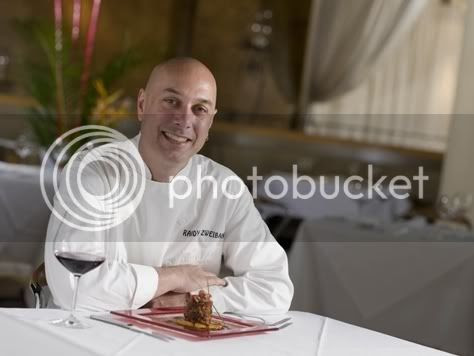 
HUGE news for the local dining community: Randy Zweiban—who's been the executive chef at Nacional 27 (325 W. Huron St., 312-664-2727) since it opened in 1998—just announced his resignation from the highly acclaimed Nuevo Latin restaurant. He's moving on to work on opening his own downtown restaurant, according to one of my Ultimate Insiders.

Bon Appetit called Zweiban's modern Latin cooking "a bold combination of flavors," so look for him to continue his stride when it opens. We'll be following this one closely.

Zweiban is one of several high-profile chefs breaking off to do their own thing this year. Graham Elliot Bowles, the former chef for Avenues (108 E. Superior St., 312-573-6754) in Peninsula Chicago, is set to open a "bistronomic" eatery by May 13. "Top Chef" finalist Dale Levitski plans to open Town & Country at Canal and Monroe this summer. And "Food Network Challenge" contestant Jason Paskewitz is also working very hard to open his Jackson Park Bar & Grill (444 N. Wabash Ave., 312-644-7200) by late April.
Served deliciously by 312 Dining Diva at 7:00 AM No comments: