Chicago's culinary couples in the spotlight 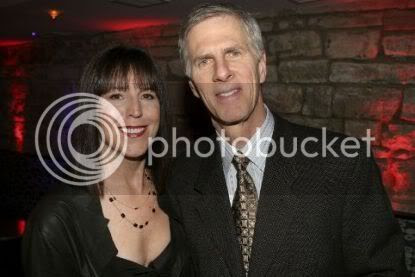 
There’s nothing sexier than seeing two people in love. And for once, we’re not talking about movie stars or other boldfaces in the tabloids.

It’s all about some of our top restaurateurs who get big props for successfully juggling their personal lives with their passion for entertaining.

And in the spirit of Valentine’s Day, which is coming up soon, 312 Dining Diva is highlighting some standout husband-and-wife teams (and a formerly married duo) who want to make you feel just as special as their bond:

Carl Anderson’s inspiration behind exotic Wicker Park bar Between Boutique Café and Lounge (1324 N. Milwaukee Ave., 773-292-0585) was his wife Lu Lu. The couple met when Carl was a wedding planner and Lu Lu was hired to do makeup and hair. When smooth-talking Carl finally managed to get his hair cut for free, he also talked her into dating him. They married eight months later in Maui. Their V-Day special is a six-course, small plate tasting of signature dishes. Each candlelit table will be adorned with lush roses and for an extra $10, guests receive Teuscher Swiss Chocolates and a half bottle of Besserat de Bellefon Champagne. $85 per person.

Chaise Lounge (1840 W. North Ave., 773-342-1840) partner Jim Lasky randomly bumped into his future wife, Mary, when he was walking his yellow Labrador puppy Sydney along Lake Shore Drive in September 1996. They had met a year earlier at a mutual friend’s party. A week after that she showed up at one of his other restaurants; they were engaged by December and married the next August. They now have two children and still have Sydney, who is now 11 ½. They’re offering three different packages for the special occasion: a bottle of wine or Champagne, choice of a shared appetizer, soup or salad, choice of entrée and choice of dessert for two for $150 per couple; the package plus a dozen of red roses for $200 per couple; the package, dozen roses and a limo to escort you to and from the restaurant for $400 per couple ($600 from suburbs).

Linda Verhey was a bartender at Lincoln Park’s River Shannon (425 W. Armitage Ave., 312-944-5087) when she met her future husband, Tom, in 1981. A year later they opened the acclaimed Pops for Champagne in Lakeview, which just celebrated its first year in its new home at 601 N. State St. in November. For the most romantic holiday, they’re doing it in grand style with a four-day celebration. They’re kicking it off with “GALentine’s Day” on Feb. 13, a ladies-night event that includes a flight of rose champagnes paired with Vosges chocolates and live music by the Mikel Avery Quartet from 9pm-midnight. The $10 cover benefits Step Up Women’s Network, a nonprofit organization dedicated to strengthening community resources for women. Pops will also feature various champagne and food specials through Feb. 16, including five rose champagnes by the glass for $12. Also, the Hinda Hoffman Quartet performs on Valentine’s Day and the Lisa Roti Quartet performs on Feb. 15-16. $15 cover.

The outstanding culinary team of Rick Tramonto and Gale Gand was forged when they were working at the Strathallan Hotel in Rochester, NY, about 30 years ago. Even though they’re no longer married, their continued teamwork on their award-winning restaurant TRU (676 N. Saint Clair St., 312-202-0001) has garnered numerous awards, including the James Beard Foundation’s “Outstanding Service” award in 2007. In addition to several luxury collection dinners on Valentine’s Day, TRU will offer a specialty dessert package in the lounge.

Mike and Helen Cameron worked together on and off in a Chicago deli, and then one day ran into each other at a Cubs’ Christmas party. Both of them had just ended relationships, so they dated for three weeks, moved into an apartment together and were engaged within two months. Once married, they worked together again at a hotel and began to conceptualize the eco-friendly Uncommon Ground (3800 N. Clark St., 773-929-3680) in Lakeview. For Valentine’s Day, Uncommon Ground is offering a three-course menu for $50. Their second outpost in Edgewater (1401 W. Devon Ave., 773-465-9801) is also offering the deal.
Served deliciously by 312 Dining Diva at 8:38 PM 1 comment: