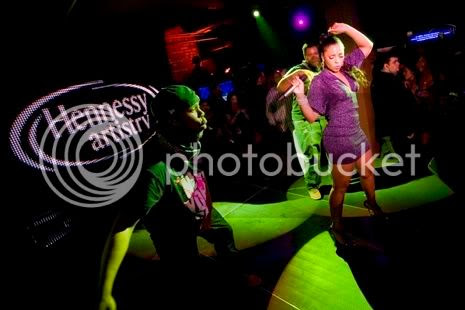 
Despite feeling a bit under the weather, R&B songstress Ashanti still managed to put on one hell of a show at Spy Bar Thursday.

In town for the touring Hennessy Artistry Series, she sang all of her hits, plus previewed a couple of songs from her upcoming album, The Declaration. It was a huge turnout for this invite-only party featuring Hennessy-infused cocktails (cognac mojitos?!) and appetizers; plus the crowd was a diverse mix of industry insiders and young professionals.

It's great to see that clubs are finally getting the message that every once in a while they need to shake things up in order to get the people out and about. Spy Bar's line was way down the street, filled with eager beavers ready to party their asses off. I don't know how long Hennessy was pouring that free hooch, but something tells me that no bottles were left over . . .
Served deliciously by 312 Dining Diva at 10:56 AM 1 comment:

The L.A. Galaxy was beaten by our Chicago Fire soccer team 3-1, so you'd think they'd be sitting in their hotel rooms licking their wounds.

Instead they hung out hardcore early Friday morning at celebrity magnet Underground, where super star David Beckham didn't shy away from the crowds—as expected—even though they were nestled in a corner.

The plaid-shirt clad Beckham just stood at his well-guarded table drinking beer and nodding his head to beats by birthday boy (R&B super producer) Jermaine Dupri, who spun a special set of hip-hop, house and R&B jams to get the crowd all worked up. Too bad Dupri's girlfriend, Janet Jackson, whose Rock Wit You Tour made a stop at Allstate Arena, didn't make a cameo.