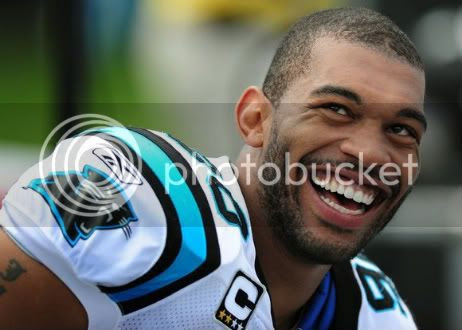 In the twilight hours after he signed a six-year, $92.5 million contract with the Chicago Bears, defensive end Julius Peppers partied like a rock star, according to an Ultimate Insider:

"Julius Peppers (newly signed Bear today) is partying (at 2:42am Saturday) at Crescendo. Has bought 20 btls."

Whether he bought bottles of bubbly or hard-core booze at the after-hours River North hot spot wasn't clear, but you get the idea. He was partying his ass off.

We found out that Peppers is no stranger to the high-rolling lifestyle. In February 2009, he donated $100,000 to a scholarship program that supports African-American students at his alma mater, University of North Carolina at Chapel Hill.

He was also referenced in Nelly's song, "Heart of a Champion," and made a cameo appearance in Nelly's monster hit video, "Hot In Herre."

I'm sure as hell it was hot in Crescendo!

UPDATE: It was indeed champagne. And he bought all 25 tables in the club a bottle. Wow.

ANOTHER UPDATE: Oh wow. Now there is video!
Served deliciously by 312 Dining Diva at 8:33 AM No comments: