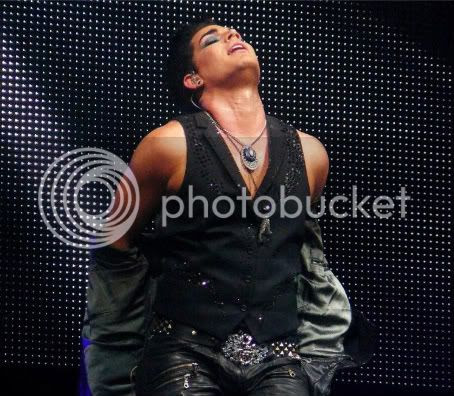 Fabulous American Idol songbird Adam Lambert, in town for the American Idol 2009 Summer Tour at Allstate Arena, dropped by the restaurant with his parents and cousin.

The restaurant's other guests—who admired the star from afar—said "he looked extremely stylish and laughed a lot" with his dining companions. And because he stuck around for at least a few hours, said sources, it's safe to say he had a good time!
Served deliciously by 312 Dining Diva at 11:00 PM 4 comments: 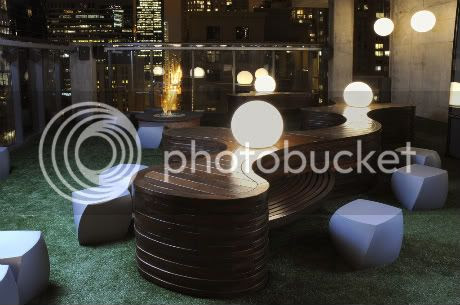 
Props to you if you recognize the Mad Men reference, but if you don't, we won't hold it against you.

For the record, our kind of high is the new Mile High Club, taking place at the Affinia Hotel's C-View, Twisted Spoke and dana hotel's Vertigo Sky Lounge.

SVEDKA Vodka's collaborated with each fabulous venue to spotlight signature sippers in September. At C-View, they're doing the Future Ex, made with SVEDKA 80 proof vodka, fresh lemon juice, house-made raspberry and thyme syrup, and garnished with a fresh raspberry.

Over at West Town's neighborhood gem Twisted Spoke, you can belly up to the bar for the CLEM_BOT (SVEDKA Clementine, pear liquor, peach puree, curry powder and orange juice with a splash of soda and garnished with a Clementine orange). And Vertigo's Mile High Club creation is the iVERTIGO—with SVEDKA Clementine, elderflower liquor and fresh muddled cucumbers.

We cannot promise you'll get the munchies after drinking 'em, but you'll certainly feel good.

Another summer bites the dust, but not before we party all weekend long!

For those of you backing the bid for Chicago to nab the 2016 Olympics, make your voice count at the local hospitality industry's rally at the downtown Hyatt (151 E. Wacker Dr.). Led by Concierge Preferred, expect more than 500 supporters to show up, including Billy Dec of Rockit fame, Tim O’Malley (Concierge Preferred), Lisa Bertomeu (Hilton Hotels) and Lori Healey of Chicago 2016. Starts at 4pm.

Tonight's the final night of the Black Harvest International Festival of Film and Video, so if you kept your ticket stub for any of the movies, you'll get free entry to the closing party at Coup d'Etat. Party with local filmmakers, producers and actors until 2am. Tone B. Nimble spins. Party starts at 9pm.

Indulge in unique frozen treats at the Chicago Luxury Ice Cream Festival, happening at the Peggy Notebaert Nature Museum (2430 N. Cannon Dr.). A number of local micro-creameries (Homer's Ice Cream, Black Dog Gelato, Castle Rock Creamery), pastry chefs and artisans will be on hand. For $25, you'll also be treated to a grand tasting of rare ice creams, experience live demos and workshops, and participate in the Great Chicago Brain Freeze—a chef competition where guests get the chance to vote for the winners and taste the results. 6-9pm.

A little freebie goes a long way, especially when we're talking cheese. Didja know America's Finest Artisan Cheeses doles out samples every Saturday?! They're amping it up for Labor Day weekend with an all-out cookout that'll include Allen Bros. steaks, ribs, burgers and of course all the high-end cheese you can stuff in your mouth. 9am-3pm. Free.

Bash on Wabash is back for a sixth year, happening in the South Loop between 13th and 14th streets on Wabash Avenue. Expect the usual street fest antics, including food vendors, arts and crafts, and live music. 11am-10pm Saturday and Sunday. $5 donation benefits the Greater South Loop Association.

Since it's a holiday weekend, branch out a little and head somewhere you typically wouldn't. We love the idea of brunching at Pilsen's Nightwood for the sweet corn and duck confit crepes; oatmeal griddle cakes; or their twist on fried chicken and waffles (with stone fruit compote, poached eggs and whipped cream).

The idea behind this Labor Day Backyard BBQ cracks us up: It's BYOM (bring your own meat!). Hosted by The Silver Room, the daylong event happens in the store and on the back patio with deejays Shon Dervis, Alton Miller and others providing the soundtrack. There's also a bar to purchase booze and grills for your meat. 11am-8pm. Free.

The White Party happens at Clybar, with a special buffet, open bar and DJ Storm spinning the hits. $20. 7-10pm.

Put on your Sunday best for the White Shoes Party at HUB 51, which should be an interesting scene if everyone follows suit. DJ Konsept spins; drink specials include the HUB Punch, which is soooo red that it'll ruin those spanking white shoes if spilled. 9pm-2am. No cover.

And if you don't plan on laying around all day basking in the "last" day of summer, make a reservation now for Cuatro's first-ever Labor Day Boat Party. They've secured an impressive list of deejays (Vick Lavender, 33 1/3), plus a special performance by MAAD SOUL. Your ticket also includes a premium open bar and lavish buffet of empanadas, chimichurri marinated NY strip skewers and more. Boat departs from North Pier (455 E. Illinois St.) at 6:15 sharp. $65 in advance; $75 at door. Get tickets here.
Served deliciously by 312 Dining Diva at 9:00 AM No comments: