I went to dinner with a couple of my best male friends last night. Unfortunately I took them to a place with flatscreens showing NCAA college basketball. I wanted to bitch and moan about current events, dating drama, blah, blah, blah, but they weren't listening. They were too busy watching whomever was playing on the tube.

So that reminded me that "March Madness" is right around the corner. So . . . it's going to get even worse. Nonstop, all-day basketball watching—especially on Saturdays and Sundays during brunch time. We may as well get used to it and embrace it and check out some spots that do sports brunch well:

Jake Melnick's Corner Tap (41 E. Superior St., 312-867-4908). The lodge-like, Gold Coast bar recently became infamous for its seriously ridiculously over-the-top hot wings that are so intense that you have to sign a waiver in order to get them. But, if that's not your bag, go for the Hot Dog Flight with three different styles of mini hot dogs. And Sunday is their regular brunch, featuring Strawberry Cheesecake French Toast, as well as a host of omelets and skillets. Also, on Sunday, go for $3.12 312 Pints or $5 Bloody Marys from the build-your-own bar.

McGee's Tavern (950 W. Webster Ave., 773-549-8200). The Lincoln Park institution is most popular for its rowdy brunch crowd, Eggs Benedict and Haystack skillets (i.e. Placido’s Mexican Haystack, Veggiestack). Oh, and how about that build-your-own Bloody Mary bar that continues until brunch time is over? You don't want to miss that action. Multiple flatscreens over the bar and at many tables keep the natives occupied, and many people get there at 11am and don't leave until it's dark outside. Now, that's a brunch.

The Gage (24 S. Michigan Ave., 312-372-4243). Or, for a more civilized brunch, we bring you this South Loop gem that's made its name as a popular post-work hangout. They've got Dirk Flanigan in the kitchen, so of course the menu's much more creative. He's put his spin on a traditional Irish breakfast, plus steel cut Irish oatmeal brulee and an apple pancake soufflé.
Served deliciously by 312 Dining Diva at 3:51 PM No comments:

Here's what Slashfood has to say on the subject.
Served deliciously by 312 Dining Diva at 9:09 AM No comments: 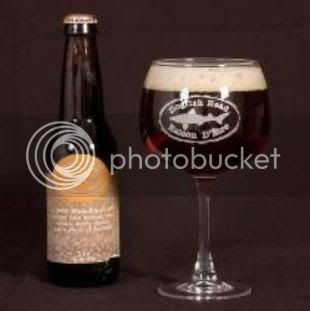 As usual, "Greazy & Sleazy" DJ Jason Larsen spins, and for those not into Doghead, the Wednesday specials are $2 Pabst Blue Ribbon Longnecks and $2 Ten High Bourbon.

If you can't make it to Delilah's tonight, head here on Saturday, Feb. 23 for Vintage Strong Beer Fest 2008. It's the 10th annual festival for this event, and guests will get to sample more than 70 beers, primarily strong ales, from over 50 breweries. Just some of the ales include Three Floyds, Goose Island, Greg Browne Brewing, Capitol, Two Brothers, Rock Bottom, Flossmoor Station, Flatlander’s and Bell’s & Lakefront Brewing. Many of the brewers will also be in attendance. Noon-6pm. $20.
Served deliciously by 312 Dining Diva at 7:29 AM No comments: