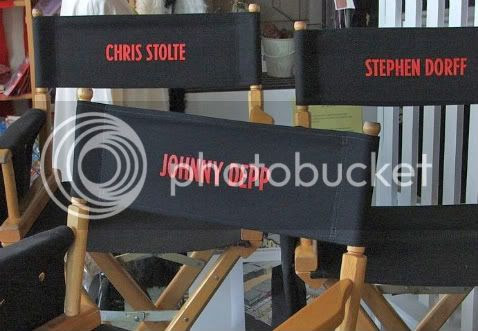 The West Loop was jumpin' Friday night as the cast and crew of the John Dillinger biopic "Public Enemies" hit Randolph Street hot spot Bon V for the official wrap party, as exclusively reported by 312 Dining Diva. No media were allowed into this private event.

One of my Ultimate Insiders was in attendance and reported that stars started arriving into the crowded club around 11:30pm. Actors Giovanni Ribisi and Stephen "Never Misses a Party" Dorff were first on the scene, then came "PE" director Michael Mann. An hour later, Oscar winner Marion Cotillard ("La Vie en Rose") sashayed in wearing a floral tee and jeans.

Even though he wasn't in the movie, Chicago homeboy and "Entourage" star Jeremy Piven came out to support his colleagues. He barely avoided another incident with a reportedly wasted Stephen Dorff (remember that highly publicized argument in a New York nightclub bathroom line last year?!), who got all up in his face in the VIP section. Luckily, their friends diffused the situation before it got out of hand and put them on opposite sides of the room.

So where the hell was Johnny Depp—the star of "Public Enemies"—during all this excitement?! He was still having dinner in the private dining room of Gibsons Steakhouse, so he never made it out. Oh well!
Served deliciously by 312 Dining Diva at 1:45 AM No comments: