On the horizon, Hub 51 (21 W. Hubbard St.), the project from brothers R.J. and Jerrod Melman (of Lettuce Entertain You fame), debuts in June.

One of my Ultimate Insiders writes in:

"My personal trainer and one of the guys from the gym who grew up with (owner) Gerald Lott stop into Connoisseur (1041 W. Grand Ave., 312-738-3055) periodically. My trainer mentioned there was a recent breakin/the cash register was stolen which is unfortunate for Gerald and the neighborhood."

That explains why the casual champagne and wine bar has been closed the last few weekends I've passed it. I hope they'll be able to make a comeback.
Served deliciously by 312 Dining Diva at 9:42 AM No comments: 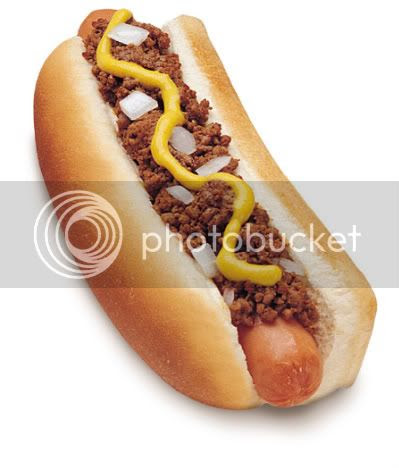 When most people think of Opening Day at Wrigley Field, they're thinking that this is the year the Cubs will finally win it all. And while I'm 100 percent behind the North Side stars, I'm also thinking about those hot dogs.

Just thinking about baseball season makes my mouth water for them, so I went in search for some of the best dogs in town:

At the Lincoln Park location of America's Dog (2300 N. Lincoln Ave., 773-281-2333), they’re specializing in hot dogs from all over the country. The all-American setting—with maps and photos of national landmarks all over the walls—attracts families during the day and boisterous barcrawlers after hours. I bypassed the Chicago-style dog for the Dallas Dog, which was smothered in a perfectly seasoned chili as well as onions and shredded cheddar cheese. For a more offbeat offering, I sampled the Buffalo Dog, which had the zing of hot wings—a spicy hot sauce, bleu cheese and celery salt bringing it all together. Out of the three that I tried, this one by far was my favorite, but the next time I go, I’ve got my eye on the Des Moines Dog a.k.a. the corndog. If you order the meal deal for your dog, you also get a heaping of seasoned curly fries, onion rings or cheddar fries. Additional America’s Dog locations are on Navy Pier and in the Loop.

Even more offbeat is Hot Doug’s, which goes off the deep end when it comes to hot dogs. Weekends draw the longest lines, and you’ll find yourself waiting for up to 20 minutes for the made-on-premises encased meats. He actually has a Chicago-style dog on the menu—which is very popular by the way—but the more adventurous go for hot dogs made with more unconventional meats like spicy jerk pork sausage, or apple-rosemary and spicy Thai chicken sausage. My favorite? The Salma Hayek, a spicy dog made of tangy Andouille Sausage.

And speaking of naming hot dogs after celebrities, they’re doing something similar at Rockstar Dogs, an after-hours joint naming its Vienna beef dogs after famous rock stars. Once you get past the awkwardly placed stripper pole (twirl on it after 10pm to get your dog for free!) at the entrance you’re good to go. Owned by Dion Antic (Harry’s Velvet Room, Iggy’s), he’s named them after the likes of Sting (tantric tofu dog), The Flaming Lip (topped with cheese and grilled jalapeños) and The Tommy Lee (foot-long dog). I kept it simple and went for The Manson—a jumbo dog with my choice of Chicago-style toppings—accompanied by some of the crunchiest tater tots I’ve ever tasted. And because it’s all about the rock ‘n’ roll in here, the meal comes packaged nicely in a box with a guitar pick as a souvenir.
Served deliciously by 312 Dining Diva at 7:34 AM No comments: