Good news for those working in the Loop: The Thompson Center location of M Burger now serves breakfast.

But it's not just any breakfast; they've joined forces with Do-Rite Donuts to satisfy that sweet tooth with treats like the buttermilk Old Fashioned as well as assorted flavors of donut holes.

I warmed up to Angus Winchester the moment he told me his favorite cocktail was The Negroni.

The dashing Englishman, who was in town last week for the Tanqueray Green Room Tour, serves as the well-known spirit's global brand ambassador, which means he is one hell of a cocktail expert.

Winchester has one of the greatest jobs on the planet: He travels the world sharing his vast knowledge of gin, cocktail culture and his experiences in the scene (The James Bond of Bartending?!). He's so popular, in fact, that he was named the Best International Brand Ambassador during last summer's Tales of the Cocktail Spirited Awards. On Tuesday, the talented 'tender was named Wine Enthusiast's Mixologist/Brand Ambassador of the Year.

Chicago was one of several cities on the tour he visited to conduct a number of cocktail seminars and bartender evaluations. A few hours were also set aside to hang with several of us food & drink writers at some of his favorite bars in town.

He took us to The Aviary, Sable Kitchen & Bar and Violet Hour, which he believes have some of the city's best gin cocktails. We sipped a number of classics, including the Aviation, Bee's Knees, Gimlet, and, of course, the Negroni.

During our little cocktail pub crawl, he answered a few burning questions:

Lite Bites: What Your Favorite Chefs & Mixologists Are Up To Around Town 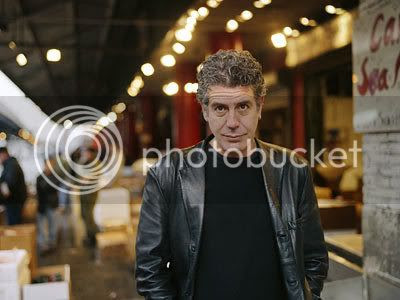 "No Reservations" star Anthony Bourdain is coming to Chicago!

• Tickets go on sale at 10am Nov. 16 for Good vs. Evil: An Evening With Anthony Bourdain & Eric Ripert. The event happens at the Auditorium Theatre on May 9, 2013, and this thing WILL sell out immediately, so you should jump on it. The Bristol's Chris Pandel will serve some of his signature bites as part of the program.

• Eater Chicago takes a look at the good, bad and ugly of the Michelin Chicago stars for 2013, including the snubbing of Paul Virant (Perennial Virant, Vie) and Bruce Sherman (North Pond).

• The Jean Banchet Awards for Culinary Excellence nominees are in. Most interesting is that mixologist Paul McGee got a nod for Three Dots and a Dash, which hasn't opened yet. The awards will be presented on Feb. 8, 2013, at the Cystic Fibrosis Foundation's annual Grand Chefs Gala.