The Last Hurrah For Homestead Until Next Year

Did you get a chance to make it over to Homestead over the summer?!

If not, you've got once more opportunity Saturday when the farm-to-table eatery hosts a seasonal closing party. Beginning at 5pm, guests will get 30 percent off on all food, cocktails, craft beers and wine (by the bottle and glass). That's a pretty good deal.

But wait, Homestead's not entirely gone until next spring. 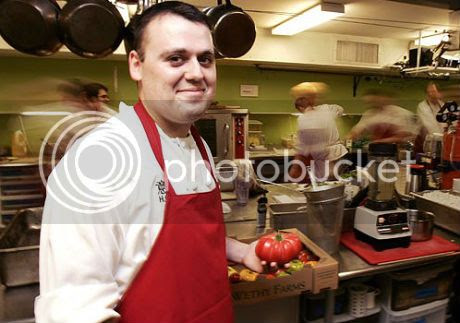 This is Moto/iNG chef/owner Homaro Cantu's candid account on Facebook of why he decided to cook for a living:

"Did I ever tell you why I went to culinary school?

"In 1996, I was living in my car. A 1985 Ford Capri 5.0 that I bought from my Uncle Robert for 400 bucks. It had been about 2 weeks since I slept in a bed. This was not a situation I was unfamiliar with. It would be the second and last fucking time I would allow this to happen to me. I mean, it really wasn't my fault I was in this situation. Sometimes life tells you to fuck off and you either fuck off or you figure it out.

The action on the dance floor in The Pump Room. (Photos: Jeff Schear/WireImage)

So, Ian Schrager had a little party Tuesday night at The Pump Room.

He had most of the dining room tables removed, threw in vibrant party favors, acquired the deejay talents of legendary producer Jellybean Benitez, and created a diverse guest list of some of the most colorful personalities in town, and suddenly it was the soiree of the season.

The celebration was for the first anniversary of Public Hotel and The Pump Room, and in classic Schrager style, the former Studio 54 owner transformed the space into the place that put him on the map. He even had Mark Benecke—one of the original Studio 54 doormen—working the velvet rope (Hopefully he wasn't too hard on folks!).

Also in attendance were former Bulls star BJ Armstrong, actor Billy Zane, the controversial cast from Chicagolicious as well as a host of drag queens, media types and more.

Here are some additional pics from the party: