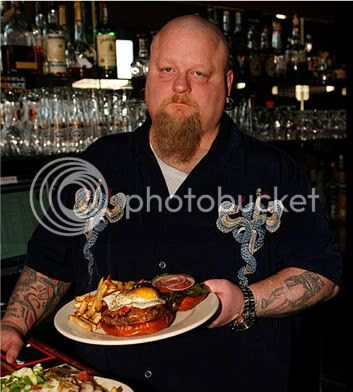 The Kuma, the signature burger with bacon, cheddar and a fried egg, is one of Playboy's "Best Hamburgers in America." (Photo: James Trevenen/Playboy)


Ask any of Chicago's amazing culinary kings and queens (from avec's Koren Grieveson to Lockwood's Phillip Foss) where they go for burgers and you'll hear this repeatedly: Kuma's Corner.

So it comes as no surprise that Playboy has added this heavy metal burger bar to the list for America's Best Hamburgers in its June issue:

"Take a look at that menu of 20 intriguing half-pound black Angus burgers named for the owners' favorite bands: Dark Throne (with chipotle peppers, goat cheese, pico de gallo); Melvins (basil, prosciutto, mozzarella); Motorhead (goat cheese, kalamata olives, oregano, tzatziki, onion, tomato). They're all well thought out and carnivorously debauched beyond words—but the centerpiece is the Kuma burger, a masterpiece piled with bacon, cheddar, and a fried egg on a puffy Labriola pretzel roll. Ask for yours rare, and rest assured there will be blood."
Served deliciously by 312 Dining Diva at 10:56 AM No comments:

Your exclusive sneak peek of The Shrine! 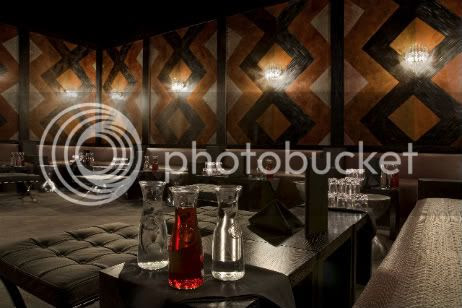 
Here's your first-ever look inside The Shrine—Joe Russo's glamorous, Out of Africa-themed night spot opening in the South Loop Thursday.

If you've never heard of Joe Russo, you've likely heard of his past projects, including the ground-breaking Funky Buddha Lounge, Italian-focused Thyme restaurant, and Sinibar, a swanky dessert and deejay-driven lounge adjacent to Thyme.

With The Shrine, a venue that's been in the works for more than two years, Russo brings to the South Loop a nightlife destination that's sorely needed. Live music (ranging from hip-hop, soul, Neo-soul and R&B) and deejay-driven nights will be the focus, but in addition to locally grown talent, he plans to bring in marquee names. 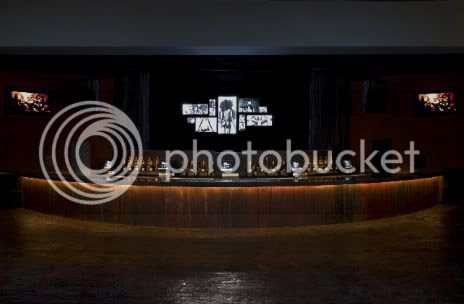 
We're looking forward to Eyes Wide Shut, Shrine's signature event series aiming to take on venues like House of Blues with exciting live music events. The monthly series happens on the first Thursday of every month and plans to draw national A-List, local and up-and-coming talent from the hip-hop, R&B, reggae music world and more.

The various VIPs certain to be rolling through will want to chill out in the Coup d’état at The Shrine, the venue's private lounge with its own separate entrance, deejay booth, bar and more. Here, guests will also have the choice to order from a menu of specialty handcrafted cocktails or the premium bar.

For the sneak peek Rebirth of Chicago Cool party Thursday, Russo teams up with urban tastemaker A.J. Johnson (full disclosure: A.J.'s 312DD's hairstylist!) for one of the best parties this city's seen in years—especially in the South Loop.

A.J.'s known for attracting Chicago's most glamorous party goers, plus Jesse De La Peña is spinning, so if I were you I'd RSVP ASAP to rsvp@theshrinechicago.com to get in. 9pm-2am. No cover; cash bar.
Served deliciously by 312 Dining Diva at 7:14 AM No comments: