No one seemed to mind that Paris Hilton wasn't there 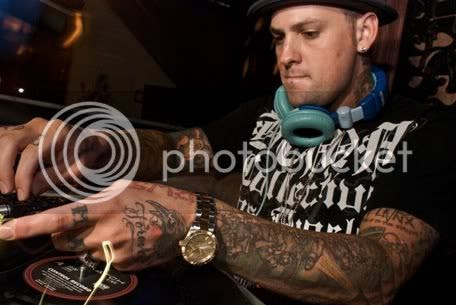 Benji Madden of alt-rock band Good Charlotte putting down some fire behind the turntables at Manor on Tuesday. (Photo: darkroomdemons.com)


Usually when I hear about celebrities trying their hand at deejaying, I just roll my eyes. Of course I had the same reaction when I got word that Benji Madden of Good Charlotte fame—and more recently for being the object of Paris Hilton's affection—was going to spin a set at Manor, but I got over that quickly once he jumped behind the turntables.

He wasted no time getting to the good stuff, cranking out some solid classic rock tunes, followed up seamlessly by some heavy-hitting hip-hop. I was especially impressed when he dug deep into his crate for some NWA and Too Short.

As all this was going down behind the deejay booth, Manor managed to have one of its best nights in a long time, with every spot in the venue crammed with people, especially a steady stream of Paris Hilton clones. Sponsored by Snow Queen Vodka and hosted by Outfit Events, the Tuesday night parties here get my vote for being one of the best industry events in town.

And speaking of industry, we finally got to meet the guy behind new drink sensation A:M (After Midnight), the premium cocktail in a can that's a blend of premium vodka, all-natural caffeine and rarified taurine. Don Deubler, CEO of Atomic Brands, convinced us (yeah, right!) to sample it in black raspberry, which just might finally knock Effen Black Cherry Vodka right off its effing throne. And I have a confession: It was so good that we popped a few of the little cans in our bags to go. Just call me Sticky Fingers!
Served deliciously by 312 Dining Diva at 2:41 PM No comments: 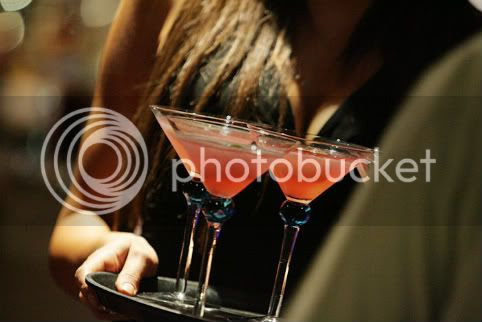 At 404 Wine Bar, onephiles can relax on the back patio that feels like an old-school crash pad. It's quiet and cool, and guests may order refreshing wines by the flight, glass or bottle to pair with salads and sandwiches.

Avenue M's appeal is also its spacious back patio, which is like a beautiful zen garden. The fabulous after-work hangout attracts neighborhood types as well as those who live in the nearby West Loop for sliders, pizzas and hand-crafted martinis.

Andersonville's sceney sidewalk spot is at Charlie's Ale House, where fashionable locals come for nightly drink and food specials. Also, it's hard to snag a seat on weekends, so get there early!

And nothing beats a lazy afternoon at the rockin' Five Star Bar & Grill, where guests come for the extensive bourbon selections and neighborhood-friendly prices. If you miss out on the sidewalk seats, they keep the floor-to-ceiling windows open so everyone gets to enjoy the nice weather. Wednesdays feature 10 cent wings.
Served deliciously by 312 Dining Diva at 8:25 AM No comments: