Get ready for Nia in the West Loop

Nia Asimis, whose father owns Jubilee Juice (140 N. Halsted St., 312-491-8500), a bar and grill in the West Loop, branches out on her own in the neighborhood with her ultra-stylish, eponymous eatery. Look for Nia (803 W. Randolph St., 312-226-3110) to open later this month offering small, eclectic plates from the Mediterranean region (from Turkey to North Africa).

Just some of the highlights include the Nia Sangria (berry flavored), several cocktails made with fresh juices and a bold, very gold interior. The 50-seater Nia is housed in a former alterations shop, so this is an all-new space with state-of-the-art equipment.
Served deliciously by 312 Dining Diva at 3:41 PM No comments:

Yep. We had it here first about Frankie's Scaloppine (900 N. Michigan Ave., 312-266-2500) taking over Tucci Benucch after it serves its last meal this Saturday.

And now here is the latest info: The new Italian restaurant opens in mid-February with a city-rustic interior of dark wood walls and tables with red, naugahyde chairs; light floors and accents such as dramatic wainscoting, glowing sconces and chandeliers.

Handwritten menus will offer salads such as panzanella, Italian salad and chopped; and appetizers including the signature farmer’s market antipasto plate, steak carpaccio and fried fennel. The main course scaloppine dishes are pounded thin and portioned big with items like salmon scaloppine all’ Milanese; chicken scaloppine all’ amatriciana; portabella scaloppine and calamari steak scaloppine. Seafood entrees include salmon hard char and scallops with pesto.
Served deliciously by 312 Dining Diva at 3:01 PM No comments: 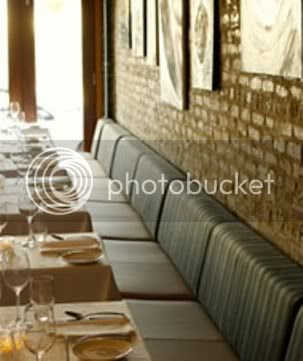 
"It was like 'A Wonderful Life' with a psychedelic Santa," says Carol Johnson, partner of Il Covo (2152 N. Damen Ave., 773-862-5555) in Bucktown, about a special Christmas Eve dinner she hosted for none other than the legendary George Clinton of Parliament fame. Johnson says that Clinton's "dinner" first consisted of only a Long Island iced tea until she convinced him to try some of the Italian eatery's signature dishes, including grilled Vegetale e Scamorza (one of Chicago magazine's top 124 dishes), the calamari fritti as well as several flavors of gelato: rainbow (just like his hair!), strawberry, pistachio, tangerine, vanilla bean and chocolate chip.

The restaurant was closed for the special event (which was a thank you party for his participation in Lip Service's annual Jingle Bell Jam), but she says that a cute neighborhood couple knocked on their door and asked if they could come in for a drink and anything the kitchen could whip up for them. The couple was sommelier Stephan Alexander and Erin Draper of the four-star Italian restaurant Spiaggia (980 N. Michigan Ave., 312-280-2750).
Served deliciously by 312 Dining Diva at 2:26 PM No comments:

The dining room at the new Rustik in Logan Square. (Photo: Rustik)


There's plenty going on in Andersonville these days, with two major openings on the horizon:

Big Jones (5347 N. Clark St.) will offer creative, contemporary Southern cuisine with an emphasis on local and organic products. And the beverage menu will include classic cocktails, a mid-sized wine list and espresso bar service. Look for it in the spring.

Suffering from the holiday blues and cold-ass weather today?

-The monthly installation of RUI: Reading Under the Influence happens nearby at Sheffield's (3258 N. Sheffield Ave., 773-281-4989) with a "hangover" theme. The event will feature readings of both published and original selections by regular performers. Drink specials: $3.50 pints of Goose Island; $4 Ketel One Citroen cocktails; $5 Ketel One Citroen martinis. 7-10pm. $3 cover charge.

New poll is up

Whatever you're getting excited about, 312 Dining Diva wants to know about it. Cast your vote at the bottom of the page!
Served deliciously by 312 Dining Diva at 7:29 AM No comments: