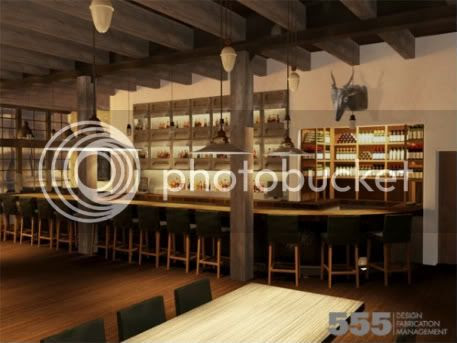 
Girl and the Goat owner/chef Stephanie Izard gives us an update on her latest project:

"well the restaurant is coming along, what seemed slowly but surely, but now at a rapid pace. and i am freakin’ out. not really… i am very excited, but just after so much time to have it so near is crazy!

"the bar is one of my favorite design elements. our designer, karen, from 555 design found a number of old fireplaces that will be polished off and used to create a gorgeous and unique backbar. for those who know me, and for many of you that do not, you know that the bar and i are dear friends. i am excited that we will be serving an array of north american craft beers. my friend lincoln who works with our friends at three floyds is helping with the beer list, as he knows more about beer than anyone i know."

On an unrelated note, but up the street in the former Randolph Street location for Bar Louie (741 W. Randolph St.), some activity is going down. An astute Ultimate Insider spotted brown paper over the windows and a sign stating that Haymarket Brewing is the new owner.

'They Brought 'Jersey Shore' to Chicago!' 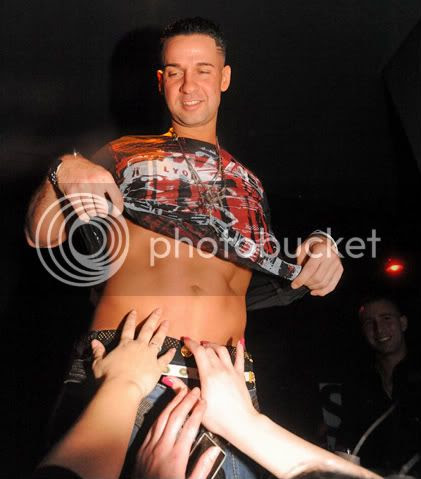 The Situation caused quite a scene Friday at Lumen. (Photo: Meredith Gregory)


"Jersey Shore" stars Pauly D and Mike "The Situation" Sorrentino made quite an impact on Chicago's nightcrawlers during a party in their honor at Lumen Friday.

"The Situation did get drunk to the point that his security guys were propping him up," says an Ultimate Insider who was on the scene. "Pauly D was low key and only did his deejay set, but The Situation was picking girls out of the crowd to bring them back to the VIP area. It was hilarious. They definitely brought the 'Jersey Shore' to Chicago. I've never seen anything like it!"

Our pals over at NBCChicago.com documented all the madness here with about 60 photos for your viewing pleasure.
Served deliciously by 312 Dining Diva at 6:09 PM No comments: 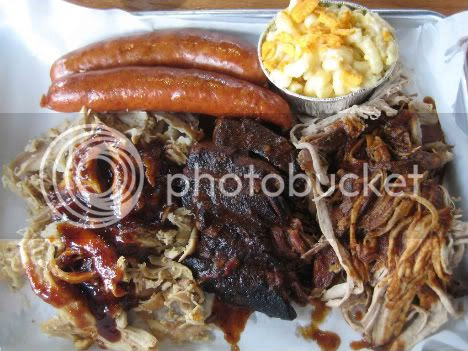 
We totes lived vicariously through the Chicago Tribune's Kevin Pang and Keith Claxton as they embarked upon BBQ Roadtrip '10—an ambitious, 72-hour project that took them to eight states over the weekend.

Armed with Maximum-Strength Pepto Bismol, Purell anti-bacterial gel and paper towels (and laptops and car!), they managed to chow down on Baby Back ribs, pulled pork and "hot" chicken in the likes of downstate Illinois, Missouri, Tennessee and Alabama:

"FRIDAY, 9:30 a.m. We didn't eat breakfast, obviously. We saved stomach space for what Mike Mills was to feed us. Mills, proprietor of the 17th Street Bar & Grill empire, is to the barbecue fraternity what Kobayashi is to competitive eating. Say his name to those in the know and a chorus of ooooh's follows. ... I'm somewhat swayed by an empty stomach, but truth be told, his baby backs were the best I've ever had. Mills appreciates the meat too much to tamper with it. A bit of 'Magic Dust' seasoning, a kiss of smoke and a light slather of sauce doesn't upstage, but amplifies the ribs. It's a gorgeous piece of work."

Reading about this BBQ extravaganza has me reaching for the Maximum-Strength Pepto Bismol right now!
Served deliciously by 312 Dining Diva at 5:19 PM No comments: