This just landed in my inbox about Iggys3:

UNFORTUNATLY IGGYS THE THIRD WILL BE NO MORE AS OF SEPT 2ND... THANKS FOR YOUR SUPPORT . . .
Served deliciously by 312 Dining Diva at 9:57 PM No comments:

What's with all the hatin'?! 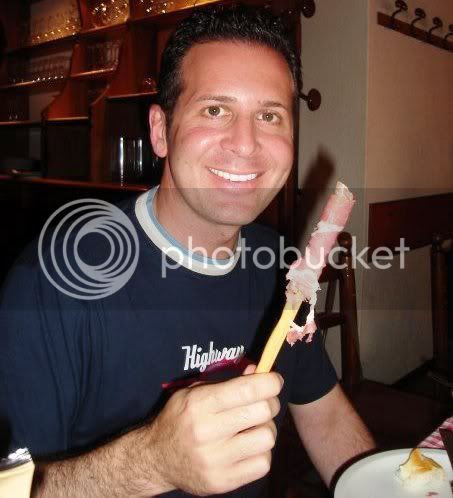 
Steve "The Hungry Hound" Dolinsky, the newly crowned dining columnist for ChuffPo, wrote one little line in his Urban Belly "review" that started a war with Time Out Chicago:

"I try to stay away from the arms race in food coverage currently being waged by Time Out, Metromix and a host of other bloggers, all of whom seem to be descending upon restaurants as soon as they open."

He went on to give the new Logan Square noodle joint a glowing review, and as far as I could tell, he was only making an observation about the current competitive climate of dining media coverage.

Who knew he'd elicit such a nasty response from TOC's David Tamarkin:

"But for a journalist with so many years of experience, his reporting is frighteningly shoddy. So before he slings another arrow, let me assure the public that not only do we give a restaurant adequate time to get off its feet, we also pay for our own meals and visit all restaurants anonymously. That last point precludes us from handing out signed headshots to every restaurant we visit, but hey, that’s the price of credibility."

What's with all the personal attacks lately, Time Out?! Is it not enough that the dining writers there spew such hatred toward anything they deem too "high end," "trendy" or "sceney?!" Or that their idea of a dining or nightlife review is to have some (*&^%$#@!@* snark in every other line?!

In their online rant, they claimed to visit restaurants after the third week or so after opening—which, in my opinion, is still too early to visit as menus are still not finalized—but interviews with several high-profile restaurant publicists prove this wrong.

I was told by four out of five of the publicists that TOC's reviewers have come into their clients' establishments as early as the first week of opening. I've also been told in the past that some staffers attempt to pressure publicists into giving them exclusives and first shot at photographing a new venue.

They also had these choice words to say about the TOC restaurant and bar reviews:

"If a place is too upscale, and not 'hipster' enough, they're always tough. . . . As soon as it appeals to a higher-end demographic, they get snarky in their reviews."

"They tend to favor the more 'underground' spots to make themselves look like the heroes . . . . they obviously have way too much opinion of themselves."

"I know for a fact that they've come in the first week; also the first or second day of opening."

"Sometimes I feel like they never find good in anything."

Also, what I think is the biggest problem here with the Dolinsky slam is just plain jealousy. Dolinsky is an established, well-respected, award-winning food personality who is recognized for his food coverage in Chicago and beyond. And for that, he's gonna always get some hater trying to come up.
Served deliciously by 312 Dining Diva at 5:55 PM 11 comments: 
The Democratic National Convention is officially underway, and just because it's in Denver doesn't mean you cannot get in on the action right here at home.

RA Sushi wants you to participate in the election process by voting on your favorite new maki roll—the Barack Attack or McCain Terrain.

Both rolls come on a "campaign platter" for $10; $3 from every sale benefits Rock the Vote. The winning candidate’s roll will be "inaugurated" onto the menu at all three Chicagoland RA Sushi restaurants through Oct. 3.

The No-Tax Lunch is happening at BIN 36 through October. This should be an extra special deal for those Loop lunchers having to pay the extra food and beverage tax for the downtown area. 11am-2pm.

Limited tickets are still available for the wine event occurring at Whole Foods Market (3300 N. Ashland Ave.): A Taste of the Pacific Northwest. Husband-and-wife team Sam and Sunny McDaniel will guide guests through some of the region's best wines and cheeses. 7-9pm. Call 773-244-4200 for the $10 tix.

Who knows who you'll catch at Monday Night Live, the big industry night over at Petterino’s. Established and emerging singers—even cast members touring with "Wicked," "Phantom of the Opera" and more!—have been known to grace the stage for cabaret and show-stopping performances. Those wishing to sign up are required to get there by 7pm and provide their own sheet music. 7:30-10pm. $15 per person dining minimum.

And summer's winding down, so it's finally time for a Chill—as in Berry Chill. Get ready for the second location—in the Loop at 132 N. LaSalle St.—which opens on Tuesday, Sept. 2. To celebrate the launch, they're giving away free Berry Chill to all 312 Dining Diva subscribers! All you have to do in order to receive your small yogurt (with up to three toppings) is to send me your name for the 312DD Guest List. Then you're ALL good! Offer is only good on Sept. 2 at the LaSalle location and an ID is required to claim your treat.
Served deliciously by 312 Dining Diva at 6:37 AM No comments: