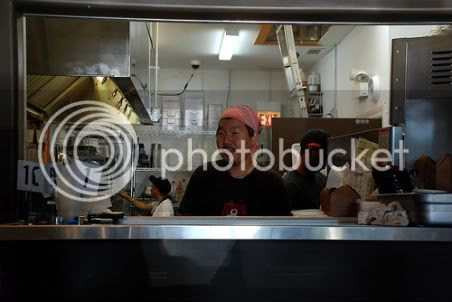 Bill Kim in the kitchen of Urban Belly.


We've been licking our chops, waiting for Belly Shack to open for months now.

But the wait is almost over, now that the sensational Bill Kim, of Urban Belly fame, is set to debut his second installation of the offbeat noodle bar some time in October.

In the meantime, we came across this video, which offers a sneak preview of what to expect of its interior. He's contracted local purveyors of retro style, Urban Remains, which has reclaimed turn-of-the-century lighting fixtures to give it an edge.

We also came across another video that gives you an idea of the sound track you'll experience when you walk in the door. The L.A.-based Italian music composer Giorgio Piovan is in charge of setting the mood, which will vary from hip-hop beats during peak hours to something a little more chilled out and globally focused at other times.

We cannot wait to see the end result!
Served deliciously by 312 Dining Diva at 10:11 AM No comments: