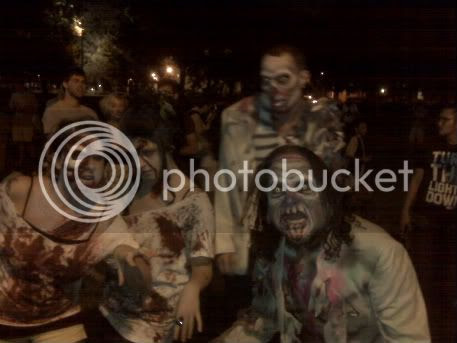 
Say what you want about Michael Jackson, but The King of Pop manages to inspire some of the most offbeat tributes ever.

In Wicker Park Saturday, immediately following the annual Wicker Park Fest, more than 1,000 spectators and participants gathered in the park for the first-ever Michael Jackson Zombie Walk exactly one month to the date of his death.

They all came looking gory as hell, decked out in bloody wedding gowns, nurse's aide costumes and military uniforms. We even spotted a few zombie "slayers," and of course, plenty of Michael Jackson impersonators. But when a mobile deejay started playing Thriller, that's when everyone stepped in unison to the zombie beat.

The massive crowd circled around the neighborhood's most popular haunts along Damen (The Violet Hour), Division (The Boundary, Bob San, Moonshine) and Milwaukee (Lava Lounge, Nick's), freaking out customers dining alfresco, bus drivers (we spotted a zombie jumping aboard a bus entertaining passengers) and cab drivers. It was in all good fun, but for a minute there we thought someone would get hurt.

Overall, it was a good time for all, and while it was an inconvenience for about an hour (blocking up traffic, etc.), it's not every day you see something as wacky as this in Chicago. Sometimes you just need to shake shit up!

UPDATE: Here a video of the event!
Served deliciously by 312 Dining Diva at 1:05 PM No comments: