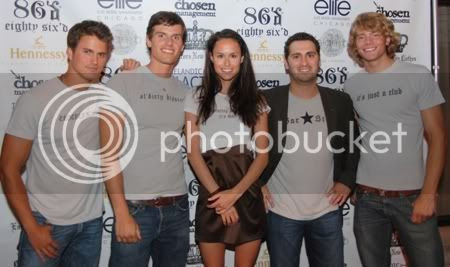 Ryan Golden (second from right), Plan B owner and co-founder of a new line of nightlife-focused tees. (Photo: Plan B Bar + Kitchen)


. . . yells out the slogan on one of my favorite tees from the new 86’d line by Plan B Bar + Kitchen owner Ryan Golden, who's debuting them in September with New York-based Emperor’s New Clothes.

The nightlife-focused tees, in fact, feature a number of insidery, sarcastic slogans playing up bar culture, including Bar Star, I Dress Down to Dress Up, Luxaholic and I’m That Model with the Bottle. These should be a hit when they hit the stores as a number of celebs have already worn tees by Emperor’s New Clothes, including the likes of Matt Damon, Jessica Alba, Chris Rock, Gwen Stefani, Naomi Campbell and Jon Stewart.

The term “86” in the hospitality industry means an item on the menu is no longer available or a guest is finished for the evening—usually from drinking.
Served deliciously by 312 Dining Diva at 12:08 PM