After hours at Publican—on its first night 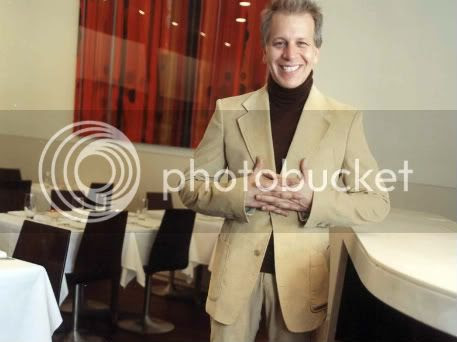 
Just stopped by Publican to sample one of those well-publicized craft beers everyone's been talking about lately. But guess what?! It was after midnight and that spot was closed.

But that's OK, we probably didn't need anything to drink anyway.

Publican partner Donnie Madia graciously gave us a tour of the airy, one-room space dominated by the color beige and over-sized chandeliers. What drew our attention the most, however, were the eight or so booths lining the walls. They had their own little doors—for semi-privacy—which should get interesting when the clubby crowds from next-door Lumen get wind of it. You know what I'm talking about. . . .

We'll be back soon to get an actual taste of those highly anticipated pork-focused dishes (peep their little mantra: "Here's to the swine, that animal divine, who through mud and slime, grit and grime, gorges over time into meats divine."), and the fab $45 Sunday Feast that Urban Daddy just discovered.

And while we were at it, we asked Madia to confirm the recent rumors about his team buying the Pontiac Cafe venue, which is reportedly shutting down next week.

"It's true," he admitted reluctantly, "but we wanted to keep that info below the radar before we decided what we wanted to do with it. These days you can't keep anything a secret."
Served deliciously by 312 Dining Diva at 1:04 AM

Can't keep secrets from Audarshia at least... She's all over it!