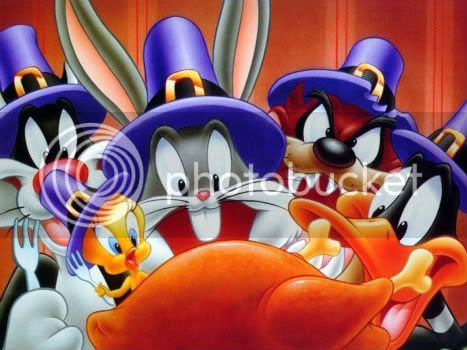 I don't know about you, but I'm more like one of those "one in 10 people likely to dine out on Thanksgiving" stats the talking heads conjure up every year. It's my most favorite holiday in the world, but it's an effing mess to clean up after.

Sooo, what's the alternative?! A number of restaurants will be open on Thanksgiving, for those looking to settle in for a seasonal supper as well as full-scale, to-go feasts, so the only thing left to clean up are the smiles on everyone's faces . . .

If you're in the mood for a more casual atmosphere, with plenty of plasmas to watch the games, head to The Pony for their take on Turkey Day. They're serving up the Thanksgiving Stack, which is loaded down with layers of homemade biscuits, fresh turkey, Julienne vegetables, mashed potatoes smothered with gravy and served with a side of bourbon pecan pie. Executive Chef Curtis McGee makes these stacks so you can order them to go. That's $12. You'll also find the savory Pony Cider (homemade with Magner’s cider, bourbon, butterscotch, apple pucker and cranberry juice) that's served in a tall pint glass for $8.

Naperville's glorious Sugar Toad, tucked inside Hotel Arista, is a great option for those in the 'burbs. Standouts on the prix-fixe menu include turkey duo of roasted breast and leg stuffed with Virginia ham and shiitake mushrooms; roasted Hayman sweet potatoes; green bean casserole; and the cream of chestnut soup with smoked bacon. $45/adults; $19.95/kids.

Glazed Donuts offers an alternative to the usual pumpkin pie with some delectable cranberry almond praline donuts. You can pre-order them now and pick them up at Bite or Swim on Nov. 26. 4 donuts/$11; 8/$20.

Additional mini sweet treats can be yours at More, the new, high-end Gold Coast cupcakery. Your folks will go mad over cupcakes in flavors like sweet potato, banana-spiced rum, cranberry, peppermint white chocolate or gingerbread. $3.50-$4.25/each, $39.50-$49.50/dozen.

For $100, at Sheffield's, you'll get a full spread of traditional family faves that's certain to feed up to six people. You'll get a roasted turkey, plus mashed potatoes, green beans, mac and cheese and cranberry sauce. Of course, there'll be a homestyle pumpkin pie to complete the meal. All to-go orders must be picked up by noon on Thanksgiving.

And legendary 'que joint The Smoke Daddy is giving you the chance to be the real hero of the night—if you bring one of their infamous smoked turkeys to the table. All meats are smoked in-house in the "Lil Red Smoker," so get ready to really chow down, and expect no leftovers. Also, grab a container of homemade cornbread stuffing to go. Orders must be placed by Nov. 21; pick up on Nov. 25. $3.95/quart of stuffing; $4.95 lb/turkey.
Served deliciously by 312 Dining Diva at 12:09 PM