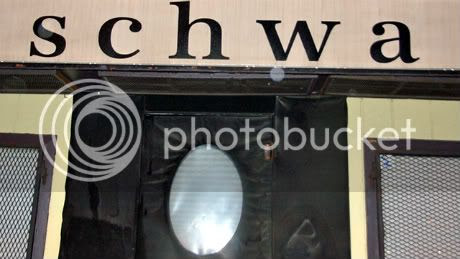 Exterior of Schwa photo via NBCChicago.com

In 2009, 312DD and NBCChicago.com teamed up to snag the first-ever look inside eccentric Wicker Park sensation Schwa.

Its focus was also on the difficult reservation system, which by now, should be better. Or that's what I thought until I got this email Tuesday from a reader:

"This happened to a friend of mine and to me personally.

"My friend made a reservation, and was canceled about 3 hours before the scheduled dinner. Her out-of-town guest had stayed an extra night in a hotel (she lives in Canada) to go to Schwa.

"During the call with Schwa about the cancellation, my friend thought fast and secured another reservation. This second reservation (this time I was invited as part of the party) was canceled about 2 hours before scheduled for dinner. My fiancé had already decanted wine worth more than $100. It was our last bottle from our trip to Portland, Ore., wine country.

"What's troubling is that there are comments on Yelp that indicate that even though we were told by Schwa the cancellation was due to a water main break (or oven malfunction, can't remember which cancellation excuse they used for which reservation), the restaurant WAS open that evening and people dined there!!

"What are your thoughts on this? If it's true that they cancel on people using false excuses, do you think this is right?"

My response to her:

"I get more complaints about their reservations issues than anything else, and NO I do not think it is right. I'm sorry that this has happened to you and your friends, and I hope you were able to enjoy your wine elsewhere at a good spot.

"I'm really disappointed to hear that they didn't give you more advance notice as well as reschedule you with a nice gesture that would make you want to come back. That is very disappointing."

It's just food people. If you're building your life around it then you need to get a new hobby. Sure, it's one of the more mind blowing meals of my life that I had at Schwa, last year, a night filled with food, wine, and drunken debauchery. Now that's a good time!

Michael Carlson runs the place like a well oiled machine, and if you don't want to play nice in the world of the wild Mad Scientist of food, then don't.

Sorry. Yes, I have a heart, and yes I feel bad for these guests, but oh well. I am glad the dudes at Schwa are true artists and still are not playing to the Yelpers, the fake writers, the psuedo food bloggers, and groupies. GOOD FOR YOU SCHWA!!

Is it fair? No. It is RIGHT? No. But that's how it goes. Go to a different restaurant that night instead.

Next time if you want a for sure bet, make a reso at Alinea where you know it will be honored then.

Yes, they do need to fix their reservation system - stat!

I've been trying to reschedule a reso from the night of the big snow storm on February 2, and they've never returned any calls, and I've seriously called no less than 50 times! And most times when I call, I receive a message telling me their mailbox is full!

The time I dined a Schwa previously, I didn't have this much trouble, and making the reservation for February wasn't too difficult, really, but it's become overwhelming challenging since then. I'm nearly ready to say "UNCLE"!

BTW, my guess is this person mentioned in your blog got bumped for a celeb they needed to make space for... but that's just a guess.

"It's just food, people" anonymous d'bag has stumbled on the wrong blog. Uh, this is a (non-pseudo) food blog, perhaps you didn't notice?

Restaurants that aren't "playing to the Yelpers" by treating their customers like shit are ultimately doomed. At the end of the day there are lot of great restaurants in this city. People don't have to, and shouldn't, go to restaurants like Schwa (or the ridiculous Graham Cracker Elliott places) if they're treated badly.

If Schwa can't be bothered to answer the phone, then use Open Table or some other internet service for reservations. They do have a computer at Schwa, don't they?

at one point schwa was signed up for opentable (contracts and all), but when OT called the restaurant to install (multiple times) no one would answer.

Well you also wrote as "anonymous" so I shall respond. Thank you for calling me a dbag. I love you.

By no means was I calling this blog anything negative. I am referring most obviously, to other people.

Awesome!! They setup Open Table and couldn't be reached to install it!? That's absolutely hilarious! CLASSIC! Thanks for that info!

I promise. Schwa is never and will be never "doomed". Michael Carlson could setup shop in a back of a broken down mini van in the parking lot of Kmart and people will flock to eat his food.

Power to the Chefs! To the restaurants! Take it back!

They fill the restaurant nightly for this very reason. It drives business and they seemingly only care about the food they prepare and not the fact that they don't answer phone calls or that they had to cancel a reservation. It's an unconventional restaurant and should be treated as such. You kind of know what you are getting into when you attempt to get a table there. When you do get the chance to dine there though, prepare to have a lot of fun. That's all it is supposed to be.

@Brad: The one time I got into Schwa--after a year of waiting--I had a blast, but I can understand the OP's point of view as well.

Is it disappointing to have your reservation canceled at the last hour? Absolutely! But speculation as to why serves no purpose and only breeds false untrue rumors. It is quite possible the reason given for closing is true. On the other hand maybe its personal.

Just a hypothetical question. By chance what if one of the staff were ill? Would that reason be accepted by all and even those unfamiliar with Michael Carlson's extremely small staff? Or how about unfortunately we are short handed this evening and only able to honor half our reservations this evening? I may very well be wrong, but in the age of the Internet that may very well cause more controversy .

There is no place worth that nonsense... That said, I kind of agree with the guy saying it's just food...But anyone who puts themselves into the "bitch" roll for a frigging over hyped restaurant shouldn't complain. They can do what they want...if you dont like it DONT GO..and quit complaining...now get your ball gag back in your mouth and shut up...

@ Anonymous - obviously, you have never been to Schwa. The place really is amazing. It is frustrating to hear how so many people have been cancelled on at the last minute. Just too bad people can't be honest and nice (present company included) these days.

My husband and I had our anniversary dinner cancelled the-day-of THREE times by schwa last year due to a "broken AC" spanning from June to September. We never made it and probably won't even bother trying in the future.
I know the restaurant is tiny and can understand no one would want to eat, let alone cook, in 90 degree temperature... but three times?? Especially given their reputation, the AC excuse seems a bit suspicious and over-used. Luckily for us, there are plenty of other amazing restaurants in Chicago :)

Get over it people. Let the hipsters have their "fun." I prefer to eat at restaurants that want my money. To the poster who was canceled upon 3 TIMES for an A/C "malfunction"--I can tell you that NO restaurant would put up with that more than once. It surely was an overused excuse.

Tried several times years ago to make reservations at Schwa. These continued stories are why I have never dined there. And no, I don't feel like I'm missing something. Chicago is blessed with amazing Chefs and Restaurants, that I don't feel the need to subject myself to anxiety about dining. Long live Blackbird, Alinea, Bonsoiree, Next, Publican, Girl and the Goat, Piccolo Sogno, TerraGusto, Province, The Bristol, etc etc etc etc etc etc etc etc etc etc etc