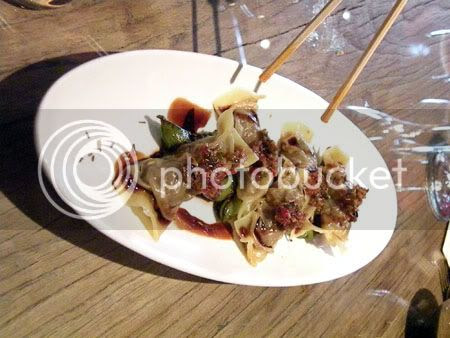 
Chicagoist food writer Chuck Sudo reminds us of why noodle joint Urban Belly is one of the best things that ever happened to Logan Square. His experience at last night's beer-focused dinner got a glowing review, with his praising the chef and Goose Island brewmaster:

"Goose Island brewmaster Greg Hall told a sold-out house that he's had every dish on the Urban Belly menu twice over, while chef Bill Kim expressed his desire to host a beer dinner with Goose Island for years, dating back to his days at Le Lan. For this dinner, Hall and Kim didn't try to expand past what they already did well. . . . This was also one of a handful of dinners where most of the attendees left without feeling like they committed a cardinal sin. Too often at these events either the pours or the food are too much for one to bear. Kim struck the right notes in making the first two courses communal, whetting the guests' collective appetite for an amazing udon with ground pork and Chinese black bean. Meanwhile the pours meted out by Goose Island's PJ McNulty and company were manageable and not intended to get diners drunk."
Served deliciously by 312 Dining Diva at 10:43 AM