What the hell is going on here?! 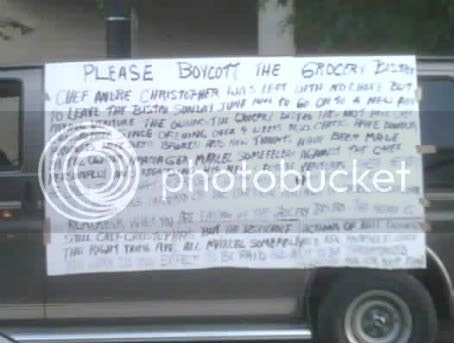 312DD got a tip from an Ultimate Insider about an apparent boycott going down Wednesday in front of West Loop newcomer Grocery Bistro.

Apparently Executive Chef Andre Christopher hasn't been paid in nine weeks, and his parents decided to stage a boycott in their van to support their son.

Says the UI: "What's up with the grocery bistro - I'm here and a huge sign - like huge is posted on a van outside saying to boycott on behalf of Chef Andre as he has not been paid in 9 wks."

That's a hell of a family stand!
Served deliciously by 312 Dining Diva at 9:05 AM

wow. everytime i pass that place its usually pretty packed, it replaced some asian cuisine byob. getting the word out definitely works to eliminate the problem. parents are the b-e-s-t.