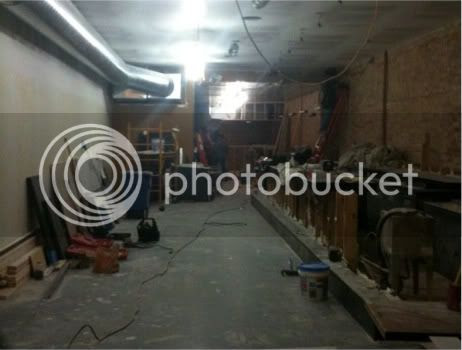 . . . but look for this space to look spectacular in the next few weeks as it magically transforms into Leopold.

You may remember it as Relax Lounge, in West Town, which struggled with a few identity issues after it was forced to change from its original name, Pharmacy, and concept of prescription-themed drinks and boozy milkshakes.

They even had former "Top Chef" finalist Dale Levitski (now exec chef at super-successful Sprout) for a spell hooking up prix-fixe dinners, but the new owners are now taking it in an entirely new direction.

They're the owners of Witts, in Lincoln Park, and before deciding on the Belgian-inspired restaurant and bar concept, they traveled to Belgium last summer.

"Chef (Jeffrey Hedin), my designer and me went to Belgium in August and had a great time experiencing the culture, cuisine and design while there," said co-owner Christy Agee. "We're very excited about the space as it will be a completely new and different venture for us. "

Can't wait to check this space out. I've been to Witt's, since they changed their concept, and the food is great and the crowd is relaxing. I love this new neighborhood they are in and can't wait to see what they do here....I'll tell everyone I know.