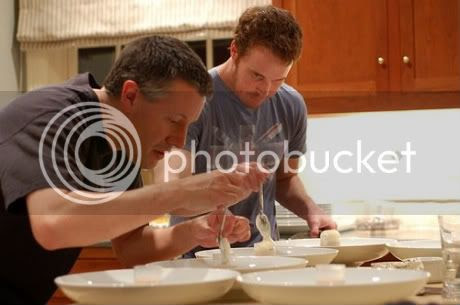 Nick Kokonas (left) and Grant Achatz of Alinea are opening The Office on the lower level of The Aviary in April. (Photo: Alinea)

What a sneaky little article the Sun-Times' Janet Fuller wrote on The Aviary Friday.

Buried at the bottom of the story was a bit about a speakeasy that owners Nick Kokonas and Grant Achatz are apparently planning on the lower level of the Warehouse District bar when it debuts in April:

". . . know that in the basement of Aviary will be a tiny bar called the Office, behind a door marked 'Office,' with yet its own food and drink menu, and to which 'we either invite you, or you book it,' Kokonas says."

Oooof. And now there is a video walkthrough of The Aviary space!
Served deliciously by 312 Dining Diva at 9:55 AM