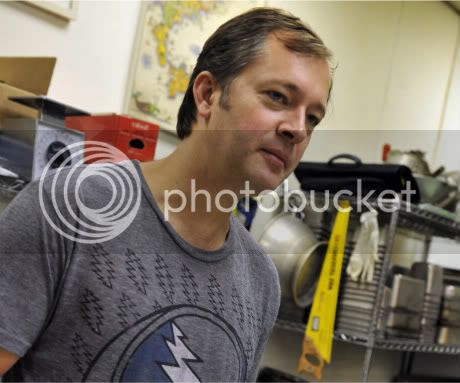 He replaces Ryan Poli, who leaves his post March 7 to take over Tavernita.

UPDATE: The restaurant will now be called Perennial Virant.

ANOTHER UPDATE: 312DD finally snagged an interview with Kevin Boehm and Rob Katz—the very busy managing partners of the Boka Restaurant Group, which owns Perennial as well as Boka, Girl & The Goat, the forthcoming GT Fish & Oyster and Landmark.

They say that the partnership with Virant was an obvious choice for them.

"We've been friends with Paul for awhile and he's been looking to do something in the city for a long time," says Boehm. "When Ryan (Poli) was looking to go, it was a natural fit."

Katz adds: "First and foremost, we are fans. When (Stephanie Izard, Kevin and I) had our celebratory dinner (for opening Girl & The Goat), we had it at Vie last summer."

With the name change to Perennial Virant, they say, will come other changes such as a new cuisine approach and interior changes to the restaurant.

"Paul Virant stylistically is the Green City Market," Katz declares. "That's farm-to-table food, so it's a perfect fit for that restaurant. The name says it all now. It will be a slightly more approachable version of what he does in Western Springs."

The team adds that they will close for a few weeks following Poli's departure to make the changes, however, they have not confirmed a reopening date.

"We'll be signaling the arrival of Paul Virant, and it only makes sense to make a fresh overhaul," says Katz.

"We're good friends with Ryan Poli, and we wish him the best of luck," he adds. "We'll be going to see him at Tavernita."

Virant will split time between Perennial Virant and Vie. He tweeted: "Glad to be partnering with Perennial, but never leaving my baby Vie. Exciting things ahead for both restaurants."
Served deliciously by 312 Dining Diva at 8:32 AM

This is AWESOME news! I loved Poli's food but Virant is the bomb. Can't wait to see the new menu.

This is one of those rare cases in the restaurant world when I'm happy for everyone involved. That's what happens when a bunch of class acts do business. Thrilled that Virant will now be so close to his beloved Green City Market and excited to be able to taste that in the food. On the flip side, I'll be seeing Kevin and Rob at Tavernita...the best is yet to come for Ryan Poli.


Thanks again for the comments! :)