Photos of Chef Martial Noguier and Bistronomic interior via galdonesphotography.com.

The place was bustling, diners appeared to be animated and elated with their entree selections, and the bar area was scattered with sophisticated European types dining on smaller plates of sardines and pate.

But there was one customer who was not happy—or impressed—with any of this and it was pretty funny to watch it all go down from my perch at the bar. 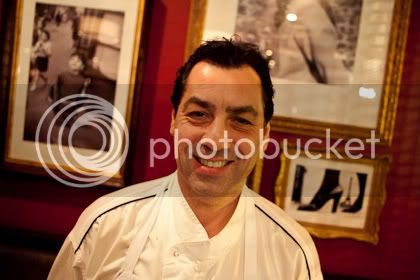 A well-known local restaurant critic was sitting directly behind me and basically complained about everything brought to the table—except dessert. I found it pretty interesting that this person knew Noguier well enough that he felt comfortable sitting down next to the reviewer to ask how the meal went.

Most "legitimate" critics insist on maintaining their anonymity, however, this particular writer didn't seem to mind the chef's presence. But the best part of their interaction was this particular bit:

Noguier: How is your meal?

Noguier: How did you like the oxtail ravioli? It's one of our best items.

Critic: I found it to be very salty.

(Face drops on critic; no response)

If it matters, I just happened to have the oxtail ravioli last night as well, and I found it to be well seasoned, tender and delicious. My only complaint was that it wasn't enough, but it was an item on the "small plates" menu.
Served deliciously by 312 Dining Diva at 11:48 AM

Darling you mean there's more callous and curmudgeonly critics out there...?