Hot Chef News You Can Use 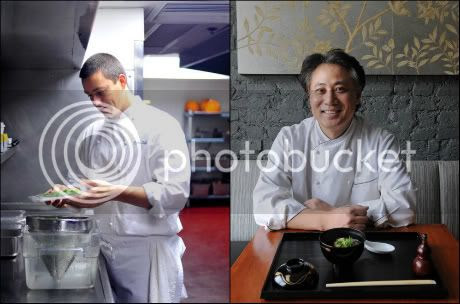 This may sound like a minor thing to you, but when you're a chef with as much clout as former Avenues chef de cuisine Curtis Duffy, it's pretty major.

He tells 312DD that after four grueling months, he's finally settled on a chair for his new restaurant that's scheduled to open in the West Loop next spring. That's right, a chair.

The award-winning toque wouldn't divulge details, but if it took this long to find one, that means it's going to be one helluva chair. He's getting 90 of them custom made, which means they will be ready by the time the restaurant debuts.

Duffy's still keeping a tight lid on the restaurant's name and location, and says that he'll be ready to make a big announcement right after Thanksgiving.

Over at Bistronomic in the Gold Coast, chef/partner Martial Noguier has finally decided to offer weekend brunch. He tells 312DD exclusively that it'll launch Dec. 10, with an entree and glass of bubbly for $27. That's a good deal considering that this native Frenchman will pick out an exceptional champagne. Brunch is 10am-2:30pm Saturday, Sunday.

Colorful chef/restaurateur Graham Elliot opens his third restaurant in Chicago, and it's scheduled to open in the West Loop, according to the Chicago Tribune. GEB is set to open at 841 W. Randolph St., becoming part of the graham elliot and grahamwich family.

L2O has yet another executive chef. Matthew Kirkley has been promoted, while former executive chef Francis Brennan will continue to consult with the restaurant and is working on a future project with Lettuce Entertain You Enterprises. Before L20, Kirkley worked at NoMI, Four Seasons Chicago, RIA at the Elysian Hotel and Joël Robuchon at the Mansion at MGM Grand.

Mercadito scored and got Michael Kornick (DMK Burger Bar, Fishbar, MK) for its Tacos for Strength campaign benefiting Share Our Strength. Throughout November, Kornick's Tacos Nopalitos y Pollo (cactus tacos with chicken and tomatillo) will be featured at all Mercadito locations, with five percent of the sales going to the organization. They are $12 for lunch (three per order) and $16 for dinner (four per order).

And any day now, renowned chef Takashi Yagihashi will open his highly anticipated Slurping Turtle noodle shop in River North. In the meantime, you can check out Roy's "under $20 noodles and rice menu" for a petite Filet Mignon that's amped up with chili marinade, noodles, bok choy, cilantro and Chinese black bean sauce or the Short Rib Bi Bim Bap of kim chee, fried egg, scallion, Shiitake mushrooms and ko chu jang.
Served deliciously by 312 Dining Diva at 9:03 AM