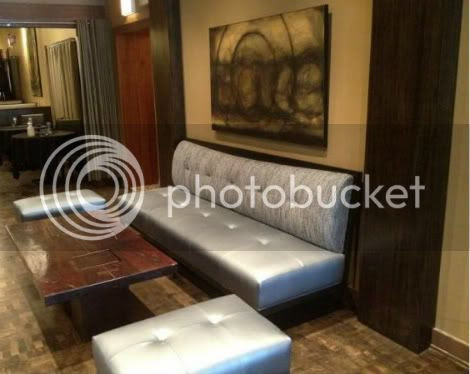 The guys behind the super successful Boka Restaurant Group have received so many accolades for their most recent projects (Girl & the Goat, GT Fish & Oyster, Perennial Virant) that it was probably long overdue for an overhaul of Boka, which opened in 2003.

So late last year, they quietly started with the lounge area so as not to disturb the regular dining service.

"It's a slow process," Boka partner Kevin Boehm tells 312DD. "We have been doing one thing at a time and it's only about 50 percent done. We have only had to close one day for it.

"We still have several things to go, including new back bar, paint, additional furniture and some wall coverings."

Based on the photo above, we like the way this is going. The project's set to be completed by mid-February, around the same time their newest restaurant, Balena, is scheduled to open right down the street . . .
Served deliciously by 312 Dining Diva at 10:57 AM

This place looks so fab... Will definitely stop by next time I'm in the city. Thanks for sharing doll!

Looks great. What happen to the bar ? They used to make great drinks. I have not been there since Dan, Benjamin and Chef Giuseppe not there anymore. Will be there again when they finish.