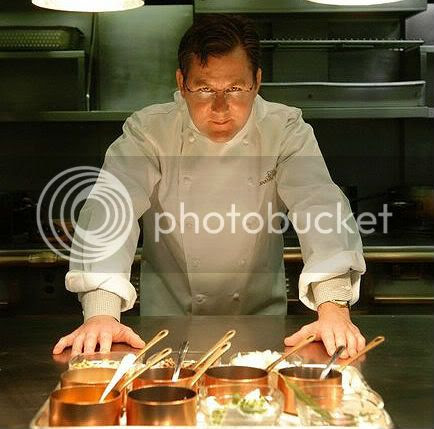 If you thought Part 1 of Mark Caro's Chicago Tribune three-part series on Charlie Trotter was intense, wait until you read Part 2.

Here are the highlights:

"(The restaurant) had these high, high standards and these high disciplines, but at the end of the day there was a dog in the kitchen."—Chef Rick Tramonto

"Trotter's early dishes and a la carte menus weren't as elaborate as the tasting menus to follow. The opening-night menu included such relatively straightforward courses as grilled swordfish with crayfish mayonnaise, and roast chicken and braised cabbage with wild rice-garlic flan."

"Guillermo Tellez, who began cooking at Trotter's in late 1989 and worked for the chef till 2005, calls the kitchen 'a culinary boot camp, because we were learning something that wasn't around at that time. You can get your butt kicked but at the same time be proud of what you do.'"

“He was big into throwing things back in the day, and he would throw food off plates if he didn't like it, at the people who made it,” says Matthias Merges, who left in 2010 and now is chef/owner of Yusho. “That was a common situation. It happened (to me) once or twice.”

"Another time in the middle of a busy Saturday service, (Graham) Elliot says, Trotter shouted, 'Whoa whoa whoa!' so loudly that the kitchen fell silent. 'He had walked by the cooler, and there was like a handprint on the glass, and he's like, ‘Whose greasy, disgusting, germ-ridden hand is on this (expletive) window, and how many of you have walked past it and not done anything?'"