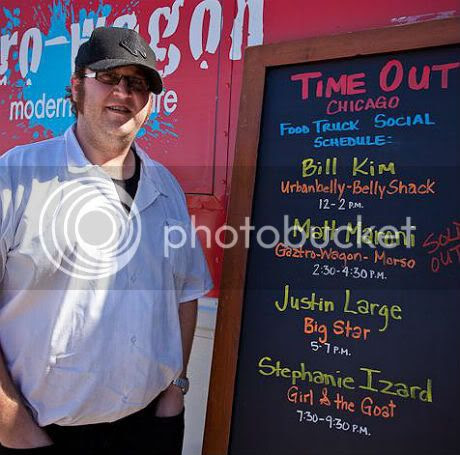 Conspicuously missing from this year's lineup is Matt Maroni, who was one of the pioneers of Chicago's food truck movement. (Photo via Time Out Chicago)

This weekend marks the second-annual Food Truck Social, which is put on by Time Out Chicago and the West Town Chamber of Commerce. But in all the excitement of more participants than ever and the expected crowds of more than 20,000, I couldn't help but wonder if it's a little bittersweet for one guy.

Matt Maroni shuttered Gaztro-Wagon in late 2011 to retool his "thought processes and move forward." Considered one of the pioneers of Chicago's food truck scene when he launched the Gaztro-Wagon in 2010, Maroni also helped organize the first year of the Food Truck Social. He even featured some of the more high-profile chefs like Stephanie Izard (Girl & The Goat), Bill Kim (Urban Belly) and Justin Large (Big Star) on his truck during the two-day event.

Believe it or not, he's not even a little sad that he's not involved in the food truck movement or this weekend's event.

It's a $5 donation, with proceeds benefiting the West Town Chamber of Commerce, Commercial Park Advisory Council, and Share Our Strength. The event takes place on Chicago Avenue, between Wood and Wolcott streets.