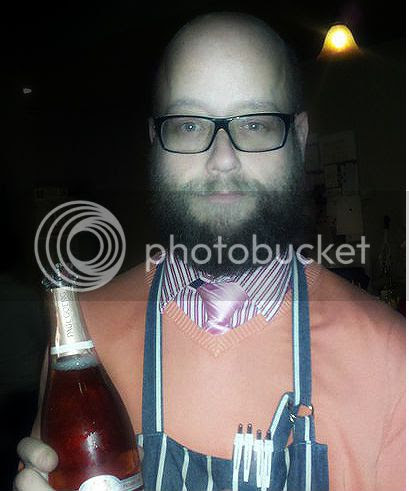 People like Scott Noorman send goosebumps down my back.

He's one of those guys who's in the restaurant business for the sheer love of it all. Not for the lights or the cameras. Not for the awards. And most certainly not for the $$$.

As wine director at the farm-to-table-focused Elizabeth, Noorman lights up as he describes the exciting beverage program he'll unveil when the Lincoln Square-based restaurant opens Sept. 19. During an exclusive sneak preview, he gleefully rolls out an impressive vintage champagne cart, which he and owner/chef Iliana Regan affectionately call the "drunk trunk."

"This will fit into what we're doing over here," he says, as he proudly points to the interior of the empty cart. "It'll mostly carry select wines and sparkling wines, but I will also leave room so I can focus on a few locally sourced spirits to make classic cocktails."

Noorman continues, going on and on about the possibility of using offbeat bitters and tinctures, seeking out stemwear, and the endless choices of vino. He then talks about how he can go to a tasting of more than 300 wines and effortlessly remember what he liked without taking notes.

His knowledge of spirits and wine is vast and impressive, so it's hard to imagine that he learned absolutely everything through experience and no formal training. Yet, after getting to know him, it's not hard to see why Alinea's Grant Achatz "to this day still calls me one of his generals; he mentions me in his book, Life on the Line."

No doubt that honor comes from the Long Beach, Calif. native's strong will and determination against all odds—something Achatz knows something about.

Since he was old enough to legally drink alcohol, Noorman has been fighting a disease that directly affects his chosen profession.

"I was on dialysis for five years starting at 21 years old when I lost both kidneys, had a transplant from a cadaver that lasted for 11 years," he says. "That failed five years ago, so here I am back on (dialysis). I have had two heart attacks, been in a coma, and 12 hospitalizations in the last five years due to complications from dialysis.

"(Right now is) one of the hardest periods of my life, but my passion for the business keeps me going and I am strong as fuck and can take the rough with the smooth. Without the transplant, I wouldn't have been able to accomplish what I have in the past, so I am very grateful."

Noorman says that while he can still drink wine and spirits—in moderation, of course—he avoids beer as much as possible. "Too many phosphates," he explains, adding that it can cause further problems to the blood stream.

Before his three-year tenure at Alinea (he was one of the opening sommeliers), Noorman worked at the now-shuttered, famed Trio, where he worked alongside the likes of Curtis Duffy (Avenues, Grace), Dale Levitski (Frog N Snail, Sprout) and Michael Carlson (Schwa). (Incidentally, he developed such a strong bond with Carlson that when GQ food writer Alan Richman hit a wall when trying to get in contact with the elusive chef for this article in 2009, Noorman made the interview possible.) Post-Alinea, he clocked time in Graham Elliot, Powerhouse, the ill-fated Black Sheep and the recently closed Premise.

"I have no accreditations, only my experience and the opportunity given by those that matter," Noorman says. That includes Elizabeth owner/chef Iliana Regan, with whom he connected when they worked together at Alinea and Trio.

"Iliana's built a name for herself," he says in admiration. "She's got the respect of a lot of chefs in this town."

Noorman also believes in the chef and her philosophy of foraging and sourcing ingredients. And with that, he's excited to match his beverage skills with Regan's cooking.

"It's what drives me because I've been given a second chance," he says. "It's been a tough ride, but ... . I think my palate is better than ever. Your senses are heightened when your mortality is shown to you."
Served deliciously by 312 Dining Diva at 6:00 AM