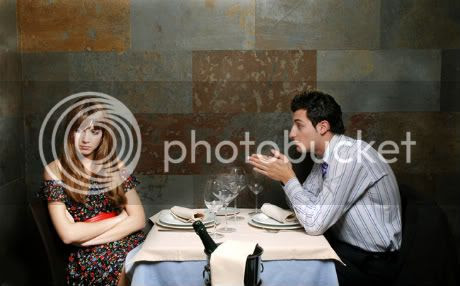 I posed what I thought was a simple question on Facebook Sunday and received more than 60 responses:

A good girlfriend just informed me that a guy asked her on a first date for dinner at foodlife. What should she do?!

Now, before you react, know that this is a guy she met randomly a few months ago at a Starbucks in her neighborhood. For some reason, it took him this long to ask her out.

Here are some of the best responses from Facebook:

"Upgrade to Mity Nice once they get there."

"Go. It's a first date. No need to invest in a dinner at Next just to see if you like each other. A first date is like a job interview. If neither one is feeling it, they can bail and still find something to do on their own. If they dig each other...Many places near by (95th) to continue the magic."

"Go. It is a first date so no need for him to go all out. Also, it eliminates suffering through courses if she finds that she doesn't want a second date."

"Go on the date. Lucky she gets food. Most of the dates I've been on only like to do drinks. Take a chance go for it."

"Luckier still someone thought enough to ask her out. I haven't been asked on a date in years!!!!!"

"Some of the best dates I've had involved more thought than money. I see nothing wrong with dollar beers and tacos as long as it's with the person you want to spend time with. A dinner at Alinea would be just as insufferable as dollar beers if the person you were with sucked ass and had zero personality. You get out what you put in on a date. And if you are more concerned with having fun vs. how much $ is spent, then you'll have fun no matter where you find yourself, or what you end up eating/drinking."

"Why would a guy ask a girl to a food court on the first date? Seems weird. There are plenty of affordable options out there!"

"She should be happy she got asked!!!! She could still be at home talking to you. She should be able to enjoy herself; it's about the time spent, not the money spent."

"Maybe he has a big balance on his foodlife card and he wants to burn it up. Maybe he really likes the food there? I've never been, so I can't say one way or the other. Lucky she gets food."

"Women complain about not having a man, lack of good men... This 'loser' you speak of may not know better than foodlife, may be hard working and have a heart of gold, does what he loves and just doesn't quite make enough money to afford a more luxe dinner somewhere on a FIRST date. Calling someone you don't know, nor know their circumstance a loser is a bit shallow and crass. It's not fair."

"It's a FIRST DATE. What if the date is WACK! Then he looks like a genius... If she wanted a better place... Maybe she should have asked him... Then she could've had her choice of fine dining."

"UGGHHHH. She should have told him to kick rocks!"

"This was a smart option .... Variety of choices ... If things go well, he can zero in on her likes and explore a more unique dining option for date #2"

"If they hit it off, she will be able to show him how to be a lil more creative. It's not really about the money in my opinion. I get that a food court is a less intimidating environment for a first date, but this spot just seems like somewhere you meet someone you met online."

Sooooooo, what was the outcome of this situation?!

After reading the flurry of recommendations, she decided to go on the date at foodlife. Here's what she had to say afterward:

"Already wants a second date and told me next time he'll let me pay (I hope this guy was kidding!). We upgraded to Mity Nice, but he doesn't drink... He convinced me to let him give me a ride. And he gives me these flowers when I get in the car and says 'You're so beautiful. I hope you like them.' I feel bad because there was definitely not a love connection."