'Survivor' star on a roll with RA Sushi 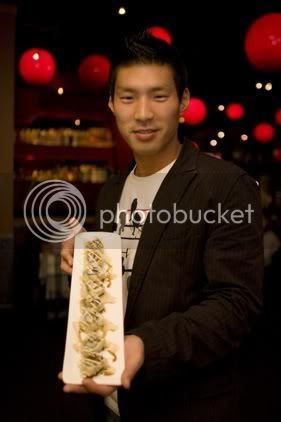 Mookie Lee and his winning RAVU Roll, which is on the menus at all RA Sushi locations through December.


Remember a few weeks ago when all those former reality show contestants had to come up with creative sushi rolls for a RA Sushi contest?

Mookie Lee—who was on "Survivor Fiji"—won for his RAVU Roll, which was named after his tribe on the Emmy award-winning show. The RAVU Roll is made of tuna, spicy salmon, unagi, scallion, avocado and cucumber, topped with tempura bits and drizzled with eel sauce and wasabi mayo. If this sounds yummy to you, it's $10 until the end of the month at all RA Sushi locations, including the one at 1139 N. State St., 312-274-0011.

And finally, $3 from the sale of every RAVU roll goes to ACTIVE Chicago, Lee's group that provides underprivileged children the opportunity to participate in organized athletics and programs within the Chicagoland community.
Served deliciously by 312 Dining Diva at 7:01 AM