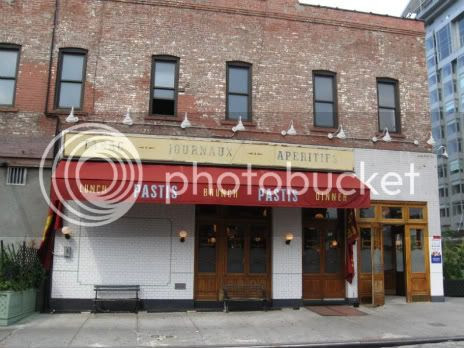 New York's legendary Pastis restaurant in the Meatpacking District is similar to Chicago's Marche in the West Loop.


I love New York almost as much as I love Chicago.

So on my recent trip to the 212, I couldn't help but compare every cool spot I checked out to my favorites back home:

Simply put, there's absolutely nothing in the world like Gold Bar, a funky little lounge in Little Italy. Thousands of miniature gold-sprayed skulls line the walls and an oversized painting of sexy blond conjoined twins stares down at the hipster and celebrity guests who dance on the sofas to old-school sounds. Just about anything goes down at Gold Bar, so Danny's Tavern and Sonotheque—known for cranking out their own brand of offbeat grooves—are the only things that come close.

HighBar (251 W. 48th St., 212-956-1300) in the Theater District has only been open for a few months, similar to Zed451 in River North. But the New York spot offers a Speakeasy vibe, as you have to snake down a sketchy narrow passageway and take a rickety elevator to get to the rooftop lounge. Upstairs, it's a burst of color, accents and beautiful people screaming over the music. Zed451's got that too, minus the accents.

Speaking of accents, at the Meatpacking District's famed Pastis, you'll hear them all at the sleek French eatery and lounge as financial guys and models belly up to the bar. Over at our Marche it's not quite the same scene, but it's still a classy crowd nevertheless.

Pop Burger's also in the Meatpacking District, but gets an entirely different demo, ranging from hip-hoppers to A-List stars for its White Castle-style burgers and fries. Deejays spin retro hip-hop and cool rock as the stylish set hangs out in the futuristic rear lounge that's guarded by a doorman. Lincoln Park's Minnies, with its 1950s soda fountain front, gets the kiddies during the day, but nighttime brings out the hungry, hungry bar-hoppers for miniature burgers, shakes, fries and more.

For a sexy, quiet dinner head to the tiny and very Euro Upstairs at Bouley in TriBeCa for wallet-friendly entrees of steak frites and sushi. You can't get reservations there like on the upper level of Le Colonial, but the dim lighting, French-focused menu and sensuous sounds are certainly interchangeable.
Served deliciously by 312 Dining Diva at 6:28 AM

The city comparison is a cute idea. So, which one comes out on top at the end? Chicago, I hope!