Back To Drawing Board For Aviary Cocktails?! 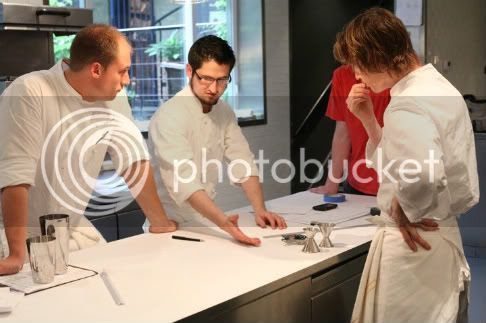 
Thirty five of Chicago's best bar stars were assembled at The Ivy Room Tuesday to get a sneak preview of the revolutionary cocktails set to be served at The Aviary when it opens soon in the Warehouse District.

Sponsored by Absolut Vodka and orchestrated by Alinea's Grant Achatz and his team, the eight-hour, $600-per-person experience included a "sensory analysis workshop," multi-course degustation and a number of full-size cocktails planned for The Aviary's menu.

These experts—who work behind the bars in some of Chicago's top restos and lounges—were blown away by the dishes and presentations, however, many said the cocktails left much to be desired.

312DD spoke to quite a few of the attendees, who said that while the cocktail presentations were damn near flawless, the flavor profiles were off. They tasted at least seven to 10 drinks, but most really only liked one: The Aviary's version of a Sidecar made with a lemongrass swizzle.

Additional feedback on the cocktails included "overdone," "not balanced" and "too strong." There was also much discussion on The Aviary's version of the classic Sazerac, which many felt was "not an authentic interpretation."

Could the bartender-less concept of The Aviary be at fault here?! One of Alinea's chefs, Craig Schoettler, is heading up the cocktail program. He's also in charge of Alinea's popular edible cocktails, which are part of the regular menu, and which the bartenders also sampled and loved.
Served deliciously by 312 Dining Diva at 7:20 AM

I find it very unlikely that G.A. would present cocktails where "the flavor profiles were off." This man is known in the industry for only serving the best of the best. Could these "mixologists" issue really lie in the $600 charge or the fact that there is a new, cooler kid in town?

Just to be clear, Absolut Vodka sponsored the event, so the bartenders did not have to pay the $600.

I'm not on anyone's side, but they did say they loved at least one of the cocktails as well as the edible ones. I don't think they're being "haters," just offering their opinions.

I asked them all separately to honestly tell me what they thought and this is what they said . . .

Understood. I'll gladly recant the comment about the cost but the last quote about "chefs moving into the bar and fucking it up" seems full of haterade to me.

I wouldn't call Aviary "bartender-less". Josh Harbinger (formerly of The Patterson House, a concept by Alchemy Consulting, same folks behind The Violet Hour) is the bartender behind the chefs.

One of the other concerns of the bartenders (I was only focusing on the cocktails here) was the "bartender-less) concept as it relates day to day.

Another made a really good point about patronizing bars because of the camaraderie, not just well-made cocktails. He said that he'd rather go to a place where there was a lively, personable bartender who made okay drinks than a place that was cranking out excellent, cocktails without the friendly face behind the bar.

I am excited to see which version we will see at The Aviary.

I was fortunate enough to be invited to this event, and it was spectacular - one of the best I have had in my career. Chefs and bartenders have always been cut of a similar cloth, and we've seen several GREAT transitions (Mike Ryan of Sable, as one example in this city alone) from kitchen to bar. Tasting and pairing is an individual art & science, and everyone is entitled to their personal take on the night. I will say that many of the techniques presented have rarely if ever seen the light of day in any bar in Chicago, and Aviary is going to take the "cocktail" conversation to new levels in our fine city (it already is, per this post!) Finally, I would ask my fellow attendees who were quoted anonymously here to remember that Craig and Chef Achatz brought their show to a venue that is not designed to do what we do behind our home bars. Having run many cocktail events around the country, I'll say that what you can produce for 40 people at one time in an empty catering space vs. the experience you can provide on your home turf, at a pace of service that is designed to handle the drinks, is often something impossible to replicate. I would challenge any of my fellow diners to produce 40 Ramos Fizz's for simultaneous service to a very discerning clientele from a six-foot folding catering table and see if the vultures start circling on them. What was presented was original, thought-provoking, and showed great technical ability on many levels. Was it all to my taste? Hey - it was a tasting menu; is it supposed to be geared to one specific palate? I personally was honored to be a part of that experience, and to share it with the company that I was able to.

Well put Kyle. Thanks for the insight.

That's kind of funny actually. After talking to some of the folks involved in Aviary after the event, these aren't even drinks that will be served there or remotely a preview of the Aviary... these were created with Absolut vodka for this event, using Absolut in every drink. So, yeah, I think these are just concerned bartenders worried that (highly skilled) chefs are invading their territory.

That's exactly why I was curious about their opinions in the first place since they were getting the first preview of them.

I agree with Kyle 100 percent. I too was fortunate enough to be invited to this dinner and it was an amazing experience. I must say, that I'm shocked to know that last comment was said by one of my fellow comrades. After reading this please don't think that's Chicago, it's not. It's one idiot who's scared of people with more skills, better palate, etc coming in the game. Take Stephen Cole for example (Violet Hour) was his first bar gig after the kitchen. He's one of the city's most talented, and one of the nicest guys you'll ever meet. Sure, I have my opinions about a bar without a bartender, but that's different story. Bottom line is, we WELCOME new talent in this city. Especially, the back of the house. For one, they bring a culinary side to what we do, and having worked alongside many great Chefs I can tell you, their knowledge is invaluable. And two, the don't have the bullshit pretension that so many possess in our field