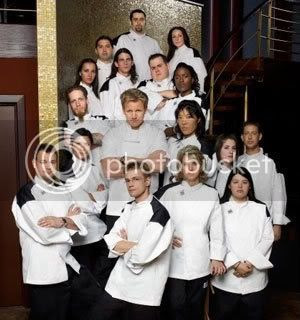 
So, I'm gonna give props to Ben Walanka again.

He's the only Chicago chef (from the Chicago Symphony Center's Rhapsody) competing on Gordon Ramsay's "Hell's Kitchen," which airs at 8pm tonight on FOX. He caused a lot of drama last week by getting into it with a couple of teammates, so if you've missed episodes, you can check them out here.

Another Chicago chef shaking things up is Lockwood's Phillip Foss, whose Chicago-Style Lobster "Haute" Dog is making mouths water all over town.

Here's what else is going on:

Goose Island head honcho Greg Hall gushed a couple of days ago on Facebook that he was releasing a new beer today. Night Stalker is the third beer in the Fulton Wood Series, and also pays homage to the Chicago-based television show from the 1970s. It's a jet black, dry-hopped Imperial Stout that's extremely rich and full flavored with malt and chocolate followed by a bright dry hopped aroma. You can also get it at the Wrigleyville location.

Café Ba-Ba-Reeba! kicks off Orange Festival with Craft Beer Bodega. You'll get 20 beers for $20, along with passed Pintxos appetizers. 6-8pm.

If vino's more your thing, head to Vivo for the weekly wine tasting. Twenty dollars will get you a number of well-selected varieties from 5-7pm. And if you decide to stay for dinner after the event, you'll get 20 percent off the dinner bill. How excited are you about the thought of the 10th Annual Jack Daniel’s Chili Cook-Off?! Happening at Sidetrack, the daylong event will include 20 competing restaurants, including Kitsch'n On Roscoe. 2-6pm. $10 cover benefits the Chicago Area Gay & Lesbian Chamber of Commerce.

Live out your "American Idol" fantasy at the Nicklebee Idol Charity Fundraiser Sing-Off, happening at Globe Pub. Winner of contest gets an all-expense paid trip to Vegas, but you get two comped cocktails. 7-10pm. $20. To find out more about Nicklebee, go here. 7-10pm.

Motel Bar is four years old, so stop by for comped drinks and food (8-9pm), then keep the party going until 3am. Deejay spins "funky" beats. No cover.

The Hearty Boys are back with brunch! 312DD and The Daddy went on opening day a few weeks back and the line was out the door. And who could blame them?! We got piping hot biscuits and waffles to tide us over before our entrees arrived. Highlights include a Breakfast Shepherd's Pie (layer of creamy chive scrambled eggs topped with crumbled sage breakfast sausage and shredded hash browns) and Lemon Ricotta Pancakes with lingonberry compote. Oh, and don't miss the Tang Mimosas and Bloody Mary Flight (Bloody Mary, Bloody Bull and Bloody Caesar). 9am-2pm. Everything's a la carte and not over $12.
Served deliciously by 312 Dining Diva at 7:07 AM