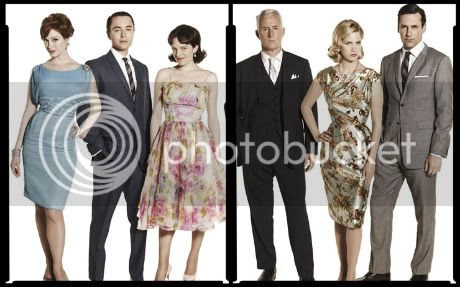 
312DD's still on Cloud 9 after Mad Men won an Emmy for "Best Dramatic Show" for the second year in a row.

And while we couldn't find any viewing parties around town for the hit 1960s-themed show (WTF is up with that?!), we did scout out some cool spots where you can get a taste of the best of the era:

A bartender at hipster Ukrainian Village hang Bar DeVille once told me he "couldn't do anything interesting with vodka." Vodka's loss is your gain when it comes to the more interesting grains of gin, whiskey and scotch. Head to the rear speakeasy section—which is decked out massively in postmodern decor—and indulge in a Manhattan or two. There's a deejay spinning classics, but not so retro that you'll bust out in the Charleston ala Pete Campbell.

Roger Laguardia didn't open his eponymous Cuban eatery until the early 1970s, one year after he came to the United States from Cuba. But it was named in honor of Los Cubanitos ("the little Cubans"), his favorite restaurant that was founded in 1950 back in Havana. Traditional Cuban sandwiches, paella and tamales are all made to order, plus the setting is discreet enough for a secret rendezvous.

Cheese fondue was all the rage back in the early 1960s and still is at Lincoln Park's romantic Geja's Cafe. For more than 44 years, it's been known for flamenco performances, dining by candlelight and dunking meats, breads and fruit in delicious melted cheese and chocolates. Now, can't you just imagine Don Draper taking Betty here to make her forget about his latest shenanigan?! 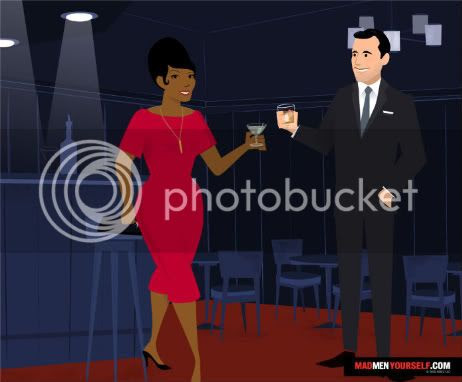 312DD getting a drink with Don Draper. (Photo: AMC)


Speaking of randy ad men, can't you just picture the boys of Sterling Cooper wooing clients over Dover sole and Caesar salad served tableside at Nick's Fishmarket?! And let's not forget the number of Side Cars and gin martinis guaranteed to go down.

The contemporary setting of new Renaissance Hotel lounge Bar Novo is ideal for an executive on the come-up like the bright-eyed Peggy Olsen. New twists on classic cocktails such as the Cucumber Pepper Margarita, Botanical Mule and Basil Tangerine Gimlet will certainly hit the spot and give you the courage to go in and demand a raise.

And when the family's away (Harry Crane, Don Draper!), there's no place like home like Silver Cloud, in Bucktown. The specialists in comfort fare whip up favorites like chicken pot pie, meatloaf, beef Stroganoff and pot roast to make you forget all your troubles.
Served deliciously by 312 Dining Diva at 10:39 AM

Wow, cheese fondue dating back to the 60's. That sure jogged my memory as a small child. Our fondue pot was red, electric and from Sears. I can still remember how thrilled Mom was as we all sat around it dunking bread chunks. It sure seemed like a much simpler time:)