Say Hello to the Next Iron Chef! 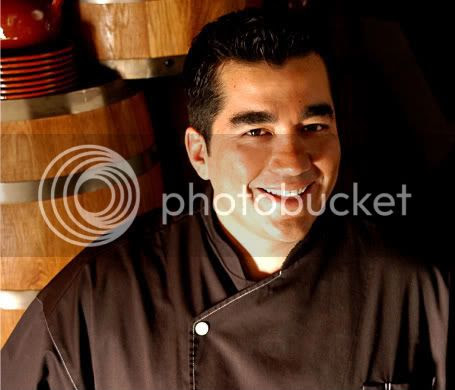 
Chicago-born-and-raised Jose Garces achieved "culinary immortality" Sunday as he was named the second-ever Next Iron Chef!

Their final challenge was to work with the secret ingredient of "ribs and racks" to produce a five-course feast exemplifying the ethnic melting pot of American cuisine. They worked with the likes of Baby Back short ribs, beef spare ribs, buffalo ribs and pork ribs, but Garces's approach of connecting Chicago's rich ethnic heritage to his dishes won over the judges. Garces told 312DD exclusively he was inspired by The Berghoff for a German-focused dish as well as Mexican neighborhoods on the Northwest Side and in Pilsen.

Highlights of his menu included a pizza topped with slow-cooked beef short ribs and balsamic bacon marmalade; slow-braised pork spareribs cooked "carnita" style; and a tribute to the South Side's soul food restaurants with baby back ribs drizzled with a spicy barbecue sauce, and served over mustard greens and bacon-infused grits.

Said an elated Garces upon winning: "It's amazing to be known, to be, the Iron Chef. ... This means everything. It puts me on a different level than most other chefs to be an Iron Chef. They're idols. They're gods. People really look up to the Iron Chefs and I'm really looking forward to taking my place alongside the others."

Here's GrubStreet's brief recap of the show and interview with Next Iron Chef Garces at what turned out to be a victory viewing party at his Philly-based restaurant Distrito.

Congrats, Jose!
Served deliciously by 312 Dining Diva at 6:11 AM