What The Hell Is Going on Here?! 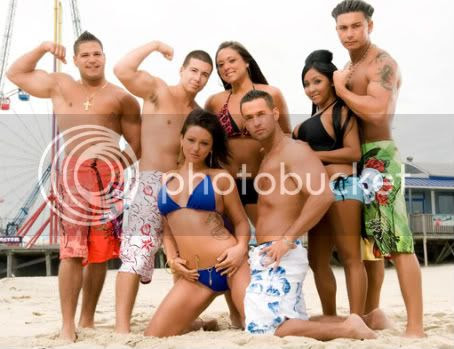 I tried to get some well-deserved R&R Friday afternoon, and apparently all hell broke loose.

According to NBCChicago.com, there will be no fist-pumping this weekend because the entire "Jersey Shore" crew scheduled to appear at local nightclubs Manor, Lumen and RiNo have canceled:

"Hordes of fist-pumping Chicagoans will be disappointed to learn that the four stars of the MTV reality show 'Jersey Shore' who were slated to hit the Chicago nightclub scene will not be coming after all.

Lumen nightclub, which was planning to host Mike 'The Situation and DJ Pauly D, announced Friday that the duo canceled because of 'scheduled appearances.'

The entire cast was pulled from all North American appearances in order to fly to Los Angeles for a major press junket hosted by MTV, according to their booking agent.

Jenny 'J-WOWW' Farley announced Thursday via her Twitter account that she wouldn't honor her commitment at RiNo, apologizing to her fans, but not giving a reason why.

But on Friday afternoon, she tweeted 'In the hotel room with @snooki sick... We r sooo congested.'

And we feel sooo sorry for you both.

A PR rep for the The LGN Group, which owns both Manor and Rino, confirmed Friday afternoon that Nicole Snookie' Polizzi, who was scheduled to appear at Manor, and J-WOWW's appearances were canceled due to an 'unexpected change' in their filming schedule.

Lumen officials said they planned to make it up to it customers by offering a hosted vodka cocktail reception from 9-10:30 p.m. and a Jersey Shore Look-alike contest with a $300 main prize.

But they won't be able to reimburse you for all that hair gel you bought in anticipation of tonight's shenanigans."

If this is all true, don't even think about coming back . . . go pump those fists elsewhere!
Served deliciously by 312 Dining Diva at 4:06 PM