Hope This Never Rolls Into Chicago! 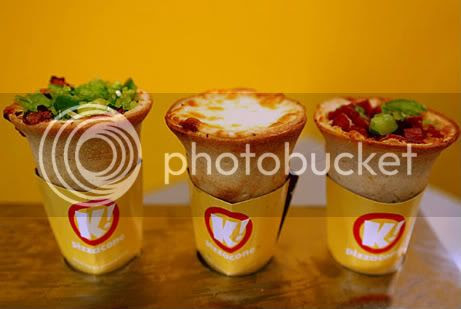 
K! Pizzacone—specializing in pizza in cones—debuted in New York Wednesday to mixed reviews, and I can see why. Who the hell wants pizza grease and toppings dropping all over their clothing after the first bite?!

Gothamist reports that the concept was first popularized in Brazil, Portugal and Italy, so I guess it makes sense to launch it first in Manhattan in the United States.

Judging from the comments in the story, folks are not exactly crazy about it:

"I saw one of these on 5th and 34th. How exactly does it work? Won't cheese and shit pour out once you take a bite into the side of the cone?"

"There are many things that could be done to improve the quality of most of the pizza in NYC. This is not one of them."

"Ever since I heard about 'Cup o' Pizza' in the movie, 'The Jerk,' I always wondered why no one started one up. Now, 31 years later, the dream is reality."

But they did get at least one glowing review:

"My uncle and I tried this place on Friday because they were having a preview day to run out kinks and whatnot. I thought that it would just pour out once you take a bit, but it's not a crispy crust, it's softer than it looks. I enjoyed it, but it was expensive. I wish they had bigger ones because I would equate three of those to one actual slice of pizza. The amount of toppings they have is great though, and it tasted really fresh and not oily."

Whatever the case, we're sure it wouldn't get a warm reception in Chicago either. Hell, we're just now getting used to thin-crust pizza!
Served deliciously by 312 Dining Diva at 6:00 AM