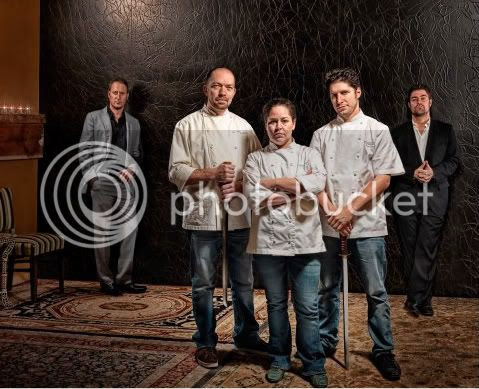 Two big-name restaurant-industry folks made Crain's prestigious 40 Under 40 list this year. They also happen to be from the same restaurant group.

Here's why they made the cut:

Izard: "The restaurant is getting mostly rave reviews, weekend reservations are nearly impossible to get and sales are hovering around $160,000 a week. ... she needs to keep the buzz going to support a heaping plateful of projects. Ms. Izard has a cookbook coming out next fall and is writing a diary of the restaurant’s first year in business. She’s shooting a pilot for a cooking show this fall and has a breakfast-and-lunch restaurant in 'the concept phase.' She also wants to launch Girl & the Goat-themed retail products, open a learning farm, build a chicken-processing plant in Southern Illinois and, last but not least, launch a non-profit to benefit local farmers."

Boehm: "Mr. Boehm had dreamed of owning a restaurant since he was a kid growing up in Springfield. Halfway through college, he moved to Panama City, Fla., to wait tables at a small high-end restaurant. He worked double-shifts six days a week to scrape together enough cash for his first place. ... (Boehm and Rob Katz) opened Boka Restaurant on Halsted Street in 2003. Sales were about $2 million. This year, they’ll be about $20 million. Their Boka Restaurant Group also includes Landmark Grill & Lounge, Perennial and Boka Catering. Soon to open: GT Fish & Oyster in the old Tizi Melloul spot on Wells Street."


Peep all the honorees right here, and congrats to all!
Served deliciously by 312 Dining Diva at 9:57 AM