Benjamin Newby Is On Fire! 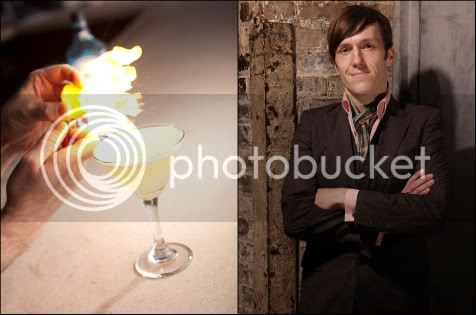 
So, Thursday night at Underground during the third-annual Modern Man Fashion Show, we had the opportunity to sample the entire fall cocktail menu. Yes, the whole damn thing.

Created by operating partner/GM Benjamin Newby, the menu consists of 10 sensational sippers guaranteed to be a hit with cocktail connoisseurs. In fact, one of the drinks was such a hit that it won GQ's America's Choice Cocktail Competition.

The Bombay General is one flaming piece of work. Literally. Made with Bombay Sapphire gin, Domaine De Canton, orange marmalade, egg white and UG's secret syrup, the pièce de résistance is when it's set on fire tableside. And after tasting it, we're not surprised it won.

But we're not sure how well a Bloody Mary-inspired cocktail will do at a late-night lounge. M.A.S.H. comes with Sauza Hornitos Reposado, tomato juice, UG pepper syrup, cilantro, cayenne pepper and egg white, and is very decadent for a crowd used to popping bottles of bubbly and vodka.