Bartenders Too Uneducated To Conceive Cocktails?! 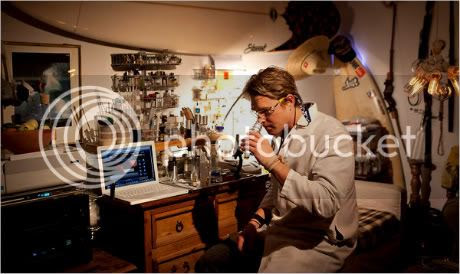 He expressed those thoughts and more in a recent New York Times article that's pissed off a number of high-profile Chicago bartenders.

Those are some pretty strong words for someone who has to work on a regular basis with his former colleagues.

But here's a just published blog post on the history of the Gimlet from local star mixologist Todd Appel.

In it, he gives a pretty intensive background on lime cordials and breaks down the flavors of a Gimlet. He sounds not only well educated and passionate about his subject, but the cocktail recipe looks good!

Also, over at Logan Square's The Whistler, head mixologist Paul McGee is gaining a strong following for his monthly Book Club. Each time, he creates a cocktail menu of recipes borrowed from classic recipe books.

What's missing from Ott's interview is passion and a lack of respect for the industry that got him where he is today.

He's going to be quite the interesting guy to watch out for this year.

NOTE: Several bartenders brought this article to my attention, so YES they do read!
Served deliciously by 312 Dining Diva at 8:38 AM

Thanks Audarshia....Clearly this guy is suffering from terminal narcissism.

That said, I'm not a star mixologist...Im very humbled you would say that, thank you

but I'm just a bartender that creates cocktails, is interested in cocktail/culinary philosophy and loves blending flavors to create something greater than the sum of the pieces...and trying to keep things honest in a world of Emperor's who wear no clothes

I love that you are humble about what you do, and I'm just going off from what I've seen you accomplish.

What I'm hoping Alex meant in his article was that bartenders like the ones on "Cocktail" with all the showmanship "have no education," but that is still insulting for people who are just hard-working people.

I'm really hoping he was misquoted, but I have a feeling that he wasn't. :O