He's Cooking For One Lucky Reader! 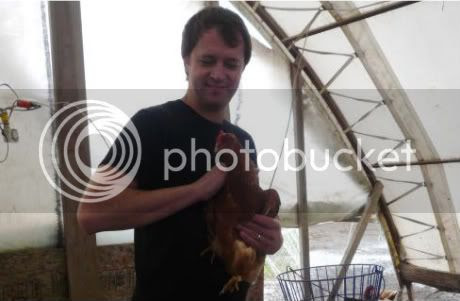 Thanks to all who entered the contest to win dinner for two at Perennial Virant, which opens in Lincoln Park in mid-May.

But there was only one winner, and Harold Smith's heartfelt email about how he wanted to take his foodie momma out for a nice dinner pulled on my heartstrings:

"I consider myself quite the foodie, hung out at Three Aces, nana, Nightwood, Naha, you name it I've prolly been there. But because of a lot of recent events, I worked at the Borders Books in Beverly that recently as the store manager, I was forced to take time off between positions without extra money to even consider eating out for a while.

"I would be honored for a chance to eat at this new resto. I'll admit to stalking it online, heck anything from the Boka folks, those are my holy grail restos. I want to go there for a big meal, but I know I'll never be able to currently afford it. This would actually give me a chance and I would actually take my mom; she fancies herself quite the foodie."

In second place came teen foodie and aspiring chef Aron Pobereskin, who wrote a well-thought out plea for dinner to impress a "hot date:"

"So, I'm writing for the seats, of course. As you know, I've been working my way around Chicago restaurants for the last two years, and have been absorbing as much food knowledge and eating as much as possible, to get a leg up in the industry. For a 17 year old like myself it's all been a pretty big deal. Chicago's dining seen has opened me up to so many possibilities, cuisines, chefs, etc., and one way it has done that is not just by cooking my way around Chicago, but by eating my way around Chicago. I worked for Ryan Poli at Perennial as a stagiare, so I'd be intrigued to see all the changes in the food and space. I know it'll be good if it's coming from Rob Katz, (Kevin) Boehm and (Paul) Virant...

Anyways, while I love eating out, I often can't afford it. I'm 17 and since quitting my part-time job at Kith & Kin to enjoy the last month of high school, to be a kid or something, I'm running towards broke.

I want these free seats for four reasons:

1. To be Influenced, to pick something up in the food that I might miss from not eating it.

3. To impress a hot date

4. I'm sure it's going to be a party, and it would make my first good Monday in a while."

And Amanda Delp gave me 10 reasons why she should be picked:

"Top 10 reasons to pick Amanda and Jason for the Perennial Virant dinner:

3. We have been fans of/following 312DD blog and Facebook for years.

5. You helped Jason pick Table Fifty-Two for my 30th birthday dinner in November, and it was the PERFECT choice (dang, that fried chicken is TAAAAAASTY!).

7. Boka Restaurant Group has some of the best restos in town, so surely PV will be a hit!

8. We are getting married in one month so we are poor and cannot splurge on nice dinners these days.

9. Due to impending nuptials, we are supposedly not eating out/eating healthier for the next month…but we can make an exception for a FREE dinner at a brand new resto!