'3 Guys in a Booth' Looking For Fab Fourth 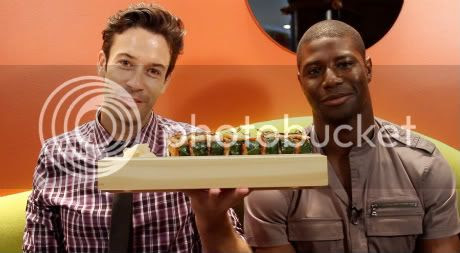 I was particularly intrigued when the latest dining-focused media dynamo came across my radar.

OK, it does have something to do with the fact that Three Guys in a Booth—a new webisode series checking out Chicago's hottest restaurants—are all exceptionally good looking (not exactly something that happens often in this industry!), but also because of who they are.

You'll immediately recognize former Bears star Jerry Azumah, who revealed to me his fondness of food when he excitedly gave 312DD an exclusive first look at Next.

Also well known in Chicago social circles is James Rhine, a former "Big Brother" contestant and restaurant/bar industry vet. The strong and colorful personalities of Jerry and James likely need balance, which is why corporate guy Derrick R. Hill rounds out the trio.

The concept of Three Guys in a Booth is pretty simple. They settle into a random restaurant booth and film their experience as they dine and dish on various subjects. It can get pretty heated as these are three very different dudes!

But now they're looking for a fourth guy—or gal—to add to the group for one night only. The trio has teamed up with Union Sushi + Barbeque Bar, which is the official sponsor of the Chicago Beach Polo World Cup. The first-ever event occurs Oct. 1-2 at North Avenue Beach, and the River North resto is setting up a "pop-up" venue for the occasion featuring a menu of sushi and kushiyaki.

Three Guys in a Booth tape their next webisode in the pop-up, and if you want to be considered for the part as the fabulous fourth, you first need to visit this site. Then submit your answer as to what the "sexiest date food" is.

The most creative, insightful and provocative answer will win that coveted spot. The winner will be announced Sept. 25.