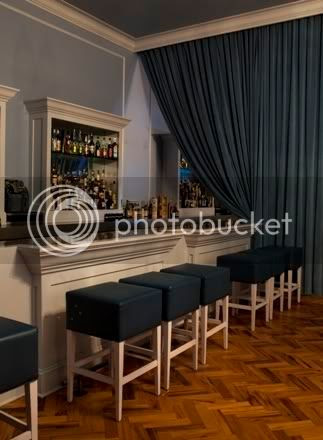 The Gage (24 S. Michigan Ave., 312-372-4243). "If you’re in it for the long haul and are doing dinner, expect to fill up—everything is rich and aggressively flavorful. Smoky haddock is formed into a cake and crisped, its smokiness balanced with lemony crème fraîche. The 'salad of crisp potato' is the Gage’s answer to those national chain fried-chicken salads: Crispy panko-coated potato pieces and chunks of tallegio cheese are tossed with a handful of arugula for a dieter’s nightmare (but a glutton’s dream)."—Heather Shouse (Time Out Chicago)

Martini Park (151 W. Erie St., 312-640-0577). "Occupying roughly a quarter of a downtown city block requires disparate areas but coherent design. CEO Chris Barish unites two bars—one curved and looming, the other underlit and backed by a stage. The massive space opens to dozens of tables and plenty of outdoors by limiting decor to metallic fabrics, flagstones, wood, slate and technology in the form of plasmas and illuminated panels. The effect: Vegas in Chicago, including the tanned and expensively dressed patrons."—Fred Schlatter (Chicago CitySearch)

Manor (642 N. Clark St., 312-475-1390). "It’s one thing to be a club that the glitterrati are clamoring to get into. It’s another if they want to come back. Flash in the pans are de rigeur for the River North club scene, and if Manor wants to live up to the solidity of its name, it has to do better than its current you-owe-me staff."—Theresa Carter (The Local Tourist)

Old Town Brasserie (1209 N. Wells St. 312-943-3000). "Appropriately, a trio of patés leads off the menu, including a creamy slab of 'chicken' liver that might have rejiggered my opinion of the bird’s potential had a server not hinted it was made from the outlawed organ of another species. Duck consomme with a single truffle ravioli was a paradigm of clear, dark amber purity, and escargots were broiled in a tomato confit, funky with Roquefort, that begged for the bread basket."—Mike Sula (Chicago Reader)

The Violet Hour (1520 N. Damen Ave., 773-252-1500). "The country's most exciting bar right at this moment is the The Violet Hour which just opened in Chicago's Wicker Park. Toby Maloney, the mixologist, is a veteran of Manhattan's Milk & Honey, Pegu Club and Freeman's and, according to some experts, he's as good a bartender as there is anywhere. On a recent eGullet post, Maloney outlined his cocktail menu, which includes a Manhattan mixed with housemade peach bitters and a rinse of Laphroaig (he's reportedly adding eye-droppers of the single malt whisky to a few of his drinks). As if that weren't enough, The Violet Hour's bar-food menu was designed by Justin Large, who cooks at Avec, one of Chicago's best places to eat; I've heard stories about his insanely good deep-fried pickles and croquettes stuffed with chorizo. I wasn't necessarily looking for a new place to drink, but I do hear that Manhattan calling my name."—Kate Krader (Food & Wine Magazine)
Served deliciously by 312 Dining Diva at 7:45 AM